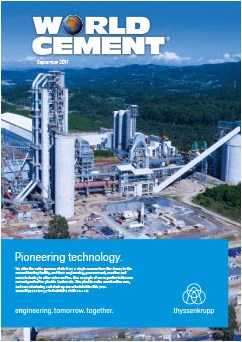 HeidelbergCement’s acquisition of Italcementi was one of two recent megamergers that reshaped the global cement industries. Next month will mark a year since it was finalised: as we approach that milestone, how should we view the deal – and what can it teach us about how we measure a company’s success?

Taking a look through the company’s most recent quarterly results, the success of the deal would appear to be self-evident. “Italcementi acquisition strengthens sales volumes, revenue, and result,” ran the first subheading in the press release touting the results. The figures underneath paint a rosy picture. Sales were up across the company’s three product divisions: cement sales registered the largest jump, up an impressive 47% to 32.8 million t. Revenues rose by E1 billion to hit E4.6 billion – a 29% increase on the previous year.

But read beyond the headline figures and the story is different.

If you add in Italcementi’s sales volumes to the 2016 comparison, this year’s sales growth is much less impressive. Indeed, sales of clinker and cement actually fall by 1% on this basis. Ready-mixed concrete sales also fall, while aggregates sales show much more moderate growth (5%, compared to 18%). This is by no means a bad set of results: it is just not as stellar as the headlines.

The enlarged company should also be in a better position to weather some of challenges facing the global cement industry, a point hinted at by Dr Bernd Scheifele, Chairman of the Managing Board, in his comments on the results: “In the light of the difficult general conditions, we achieved a good result in the second quarter,” Dr Scheifele said. “We were able to almost offset the effect of higher energy costs, bad weather conditions, fewer working days, and increased competition in some emerging countries.”

Beyond financial measures, however, the integration of Italcementi is proving more of a challenge. In its 2016 Sustainability Report, Dr Scheifele admitted to being dissatisfied with the enlarged company’s performance.

“We were able to reduce the number and severity of accidents, as well as the number of fatalities,” Dr Scheifele said. “However, we are still not satisfied with the result. We will have to further intensify our occupational safety efforts and introduce HeidelbergCement standards at the production sites of the former Italcementi Group.”

Health, safety and the environment (HSE) are then the areas that ask the largest questions of HeidelbergCement’s ability to digest Italcementi. But these are not just issues for HeidelbergCement. At all companies operating in the cement industry, excellence in HSE should coexist with financial excellence. Where they do not, management should be dissatisfied: anything less is simply not good enough.