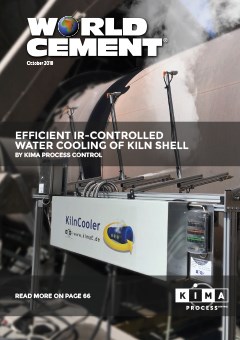 Last month the Trump Administration announced duties on US$200 billion of Chinese imports. The move drew a quick response from Beijing, which imposed tariffs on US$60 billion worth of US goods. What makes this latest escalation particularly relevant to this column is the inclusion of cement – as well as a range of other building materials – for the first time on the list of goods to be targeted.

According to the tariff list released on 17 September by the Office of the US Trade Representative, duties are to be imposed on a range of cements, as well as a variety of lime products, including limestone for use in the manufacture of lime or cement, and various aggregates and slags.

That is not a large amount in a total market size of 95.51 million t last year (according to USGS data). Given current global supplies are hardly tight, there will be plenty willing to step into any gap left by China. It will also have very little impact on Chinese producers: 1.28 million t is a drop in the 2.4 billion t ocean that is Chinese annual cement production. The country is also slashing much more in capacity under strict production controls being enforced by the central government.

The inclusion of Chinese cement and related products on the tariff list is then a minor ripple on the global stage. It may however be of some concern to those larger importers of cement to the US: Canada, South Korea and Greece have either been threatened with tighter trade regulation or subject to US tariffs (Greece as part of the EU). With an uncertain political environment in the US as the country prepares for Congressional elections, it is – as Contributing Editor Paul Maxwell-Cook is fond of saying – a case of “watch this space”.

Watch this space is indeed Maxwell-Cook’s counsel at the end of his dive into the cement industries of Turkey and Central Asia (pp. 10 – 14). This is particularly apt for Turkey, where the newly re-elected President Tayyip Erdogan continues to push some huge public infrastructure projects in the run up to the centenary celebrations of the Turkish Republic’s founding.

Despite the demand created by these projects, high levels of competition (driven by a build-out of capacity in the country) and higher costs are proving challenges for the industry. A weak lira is also impacting the profitability of foreign-owned plants: TITAN Group for example reported net profit from its Turkish subsidiary down to E0.5 million in 2016 compared to E3.6 million in 2016. Meanwhile, Turkish exports of cement to Israel have been reportedly hit with antidumping measures: a reminder that arguments over trade are more widely spread than the headline-grabbing acts of the Trump Administration.

Technically speaking, this month we include features on logistics and dispatch, domes and silos, modular grinding plants, air pollution control, and handling alternative fuels, as well as an article from cover advertiser KIMA Process Control describing the controlled cooling of cement kiln hotspots with water spray (pp. 66 – 71). Finally, I took a trip to Italy earlier this year to visit WAMGROUP as it celebrated its 50 year anniversary. I review this history, as well as its drive into the future, on pp. 63 – 65. Enjoy the issue!