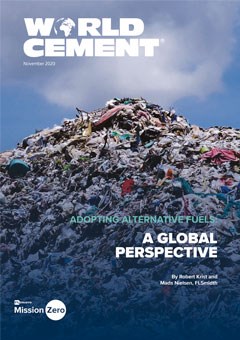 November promises to be an interesting month. By the time many of you read this, the United States will have held its 2020 election – one of the most contentious and closely fought in living memory – the outcome of which has the potential for huge repercussions at almost every level of American society, including construction.

Construction is a major sector of the US economy. According to the Associated General Contractors of America (AGC), more than 7 million Americans are employed in construction and the sector is responsible for almost US$1.3 trillion worth of new structures annually. In other words, construction is big business and whoever wins the election could have a significant impact on the sector.

Indeed, construction is such big business that presidential candidates often announce plans for major infrastructure investment. Whether these plans ever make it into law however, is another matter entirely. Democrat nominee Joe Biden’s ‘Build Back Better’ plan promises to include US$2 trillion of investment for infrastructure, housing, and a host of other areas, including green energy. President Trump has also repeatedly called for investment in infrastructure – a large infrastructure bill had been mooted earlier this year, but due to disagreements over the details it was ultimately killed off at the Senate level.

I’ll hold back from making any predictions as to the outcome of this election – recent years have shown polls to be about as reliable as reading tea leaves or staring into a crystal ball, and I don’t want to add to the list of wrong guesses. Whoever wins the election though, America’s infrastructure needs investment. The American Society of Civil Engineers (ASCE), which produces a ‘report card’ on the state of US infrastructure every few years, gave the country a lowly D+ rating in 2017. Built to high standards 50 years ago, much US infrastructure is robust, but it is in ever-growing need of upgrades and expansion. Here’s hoping for some bipartisan support for infrastructure development in the near future.

Whilst I can’t predict election results, I can confidently predict that if you’re reading World Cement, you’ll be interested in attending Optimisation 2020. Coming up on 18 – 19 November, this two-day interactive, online conference will feature a host of technical presentations from companies, such as FLSmidth, Christian Pfeiffer, FCT Combustion, OSIsoft and many more.

In addition to the presentations, you’ll also be able to interact with virtual exhibition booths and network with other attendees via chat or video calls. To secure your spot at Optimisation 2020, head over to www.worldcement.com/optimisation and register for free. We look forward to seeing you there.