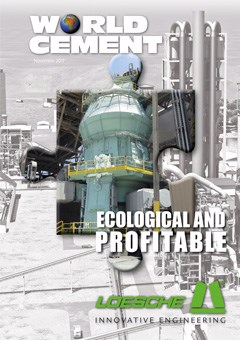 It’s been an interesting few weeks for watchers of the US cement industry. Headlining events, CRH and Colorado-based Summit Materials are engaged in a stand-off over control of Ash Grove Cement. Both are reported to have bids in for the largest remaining independent US cement maker – and at US$3.5 billion from CRH and around US$3.8 billion from Summit, it is serious money for some 8.5 million tpy of cement production capacity.

CRH was also reported to be close to acquiring Florida cement producer, Suwannee Cement, from Votorantim Cimentos and Anderson Columbia: a strong indication that the Irish company (which is not known for profligacy in its dealmaking) is positive on US demand for building materials.

The positive outlook is echoed by a number of analysts. Although adverse weather and lower-than-expected budgets for public construction spending recently caused the Portland Cement Association (PCA) to lower its expected demand growth for this year and next, it still anticipates respectable growth of 2.6% this year and 2.8% next year.

Similarly, CW Group Senior Analyst, Raluca Cercel, told World Cement that, “cement demand in the US is growing at a healthy and sustainable pace, and we believe it will continue to do so on the back of residential construction activity.”

So far, so positive. The PCA goes further, however. “Once infrastructure and tax reform initiatives take hold and affect economic and construction activity, then we can expect growth in cement consumption to accelerate to higher levels,” said its Senior Vice President and Chief Economist, Ed Sullivan.

The PCA includes a US$250 billion infrastructure programme and tax reform in its forecast with the impact coming from late-2019. This continues the association’s positive approach to political stimulus: more caution may be required.

With relations between the White House and Congress tepid at best, there is a real possibility that neither tax reform nor infrastructure investment will pass before the next Congressional election campaign starts in earnest next year. As The Economist noted recently of US Senators: “when asked point-blank what major legislative achievements are possible by November 2018, a surprising number wince and reply: maybe none.”

Even assuming the passage of both measures, the “dual fiscal stimuli will add to inflationary pressures [necessitating] a stronger Federal Reserve reaction and [resulting] in a rapid and perhaps larger-than-expected increase in interest rates,” the PCA said. “Construction is an interest sensitive sector and a slowdown and perhaps a decline in activity is expected beginning in late 2021.”

In March, I noted that the positive outlook for US cement lay not in the overhyped announcements of politicians. That is a good thing: as we have seen over the past six months, politics is an unpredictable and fickle game. Instead, the positive outlook for US cement lies in the current soundness of the US economy, which is driving construction activity – particularly in the residential market. Those fundamentals may get less airtime than the vague promises of the political elites, but are a much stronger (dare I say, more concrete) foundation for sustained growth – as the US$3.5 billion plus price tag for Ash Grove Cement shows.