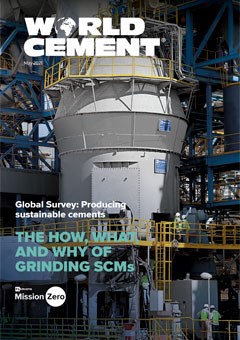 Back on 31 March, President Biden officially announced ‘The American Jobs Plan’. The plan is the second part of the President’s ‘Build Back Better’ agenda to rescue the US economy and support recovery by taking advantage of future economic opportunities; the first part, the US$1.9 trillion ‘American Rescue Plan’ passed earlier in March.

Costed at ~US$2 trillion, the American Jobs Plan is a sweeping package designed to create jobs through the upgrading of ageing US infrastructure, the revitalisation of manufacturing, and investment in the so-called ‘caregiving economy’ (schools, child/elder-care, etc.). Whilst nearly US$1.2 trillion of this package will be directed at projects with little or no demand impact on cement, Mike Ireland, President & CEO of the PCA, points out in this month’s Regional Report (p. 10) that the remaining projects would still result in around 7 million t of additional annual cement consumption.

And with respect to infrastructure, the US certainly needs the investment. Every four years, the American Society of Civil Engineers (ACSE) provides a ‘Report Card’ for US infrastructure and, by their reckoning, the US is not exactly on the path to an Ivy League future. Though an improvement on 2017’s D+ rating, the ACSE gave the US a lowly C- this year, citing that: 43% of US roadways are in “poor or mediocre condition”, 46 154 bridges (7.5%) are “considered structurally deficient”, 6 billion gal. (>9000 swimming pools) of drinking water are lost every day due to leaks, and that 45% of Americans have no access to any form of public transit, amongst other areas of concern.

Whilst the case for improving US infrastructure in principle is unarguable, forming a consensus on exactly how much to spend and where may prove to be a difficult task. Despite equating to roughly 10% of US GDP, the American Jobs Plan is less than a quarter of the US$10 trillion proposed as necessary by some groups. Whilst this particular disagreement is unlikely to scupper the plan, it goes to show the range of opinion in terms of how far such projects should go, even from those broadly supportive of the objectives.

Where the plan might face real difficulty, however, is from those who think it goes too far. According to Reuters, a bipartisan group of lawmakers in the US Congress have already begun work on an alternative infrastructure plan that would cost roughly half as much yet spend far more on roads and bridges. Senior Republicans also recently announced an even cheaper plan costing a ‘mere’ US$568 billion.

House Speaker, Nancy Pelosi, has expressed hopes to pass the American Jobs Plan by July, but with opposition from both sides of the House, only time will tell.