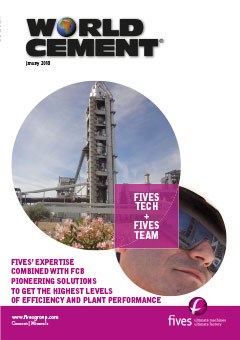 The opening of a new year always provides an opportunity to reflect on what may lie ahead. Here’s my pick of things to watch.

Mergers and acquisitions (M&A). 2017’s big deal saw Irish multinational CRH launch a successful US$3.5 billion bid for the largest remaining independent US producer, Ash Grove Cement. Beyond this, however, the trend was for smaller deals. These smaller, regionally-focused deals seem more likely to continue in 2018, especially with CRH, a perennial dealmaker, apparently swearing off further major deals (at least for now), after last year’s splurge.

LafargeHolcim. With a new man in charge and intent on making his mark, the Swiss multinational could be in for further changes beyond the leadership and organisational shakeup announced at the end of last year (see p. 5). A strategic review, expected to report back in March and announced with the company’s full year results, will give more details of the company’s direction under Jenisch.

The company also remains embroiled in a scandal over alleged payments that predecessor company, Lafarge SA, made to terrorist groups in Syria when operating a cement plant in the country. The scandal has already claimed the job of former CEO Eric Olsen. He resigned last year, after a highly critical internal report admitted that the company made “significant errors of judgment”, although the company said at the time that it did not hold Olsen responsible.

Any hope that Olsen’s departure might draw a line under the story have been dashed, however, as French investigators placed him under formal investigation towards the end of last year, charging him with funding terrorist groups. It’s a story that seems likely to rumble on through the year: not a happy prospect for the man now occupying the CEO’s chair.

US tax cuts and midterms. 2018 should also continue to be a lively year in US politics. President Donald Trump will be buoyed by the successful passage of tax reform through Congress and into law: the first major legislative achievement of his term in office.

Additional accomplishments may be difficult, however, as eyes begin to turn to the midterm Congressional elections in November. A Republicans loss in the House of Representatives (a distinct possibility on current poling), would stymie any furthering of Trump’s legislative agenda, likely forcing the president to rely on executive orders to pursue his aims. It would also renew talk of impeachment – although the chances he will be removed from office are slim.

Meanwhile, the US economy seems likely to continue ticking over nicely, despite the shenanigans in Washington DC, with analysts expecting growth of around 2.5% – partly on the back of Trump’s tax reform. This should support rising cement demand.

Whatever happens, World Cement – now in our 90th year – will continue to provide the industry coverage you have come to expect with our blend of industry news, technical articles, and plant tours. Observant readers will also notice a change to the end of the magazine: ‘Five Minutes With…” is a new series of short interviews with key players in the global cement industry. Per Mejnert Kristensen, President of FLSmidth’s Cement Division, kicks us off on p. 88 of this issue.

Do let me know what events and trends you will be watching this year – either by email (jonathan.rowland@worldcement.com) or through our various social media channels. I look forward to accompanying you on the journey through 2018.