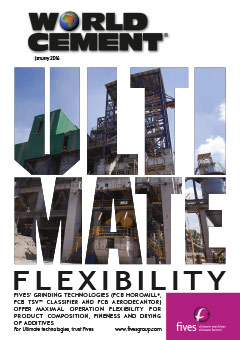 In the run up to COP21 – more of which in the next few issues of World Cement – Moody’s Investors Service prepared a report looking at the potential impact of environmental risks on the credit quality of 86 sectors, including building materials. The report defined the risks in two categories: direct environmental hazards, and the consequences of the regulations that seek to reduce those hazards. Needless to say, the building materials industry was categorised as facing a material credit risk in the next 3 – 5 years as a result of the cost of complying with air and carbon regulations. The majority of readers will recognise this threat; many are already dealing with it. Those who aren’t know it is coming.

The sectors listed as particularly at risk are as obvious as they are essential, among them oil and gas, mining, steel, chemicals and power generation. Coal comes off the worst – an ‘immediate’ rather than ‘emerging’ risk. It is true that many countries are cutting coal consumption, but this is not the case everywhere – India plans to up coal production to 1.5 billion t by 2020.

India’s best alternative to coal appears to be solar power, but it’s not an alternative for everything. Cement kilns don’t run on solar power and nor does a blastfurnace – both will be needed if India is to move from developing to developed. More to the point, coal is the easier, more established option – provided the coal companies can sort themselves out.

A lot rides on India and its energy choices, which are being touted as ‘make or break’ for global success at staying under that 1.5°C warming limit. India is set to become the world’s most populous country within the next 10 years. It could be the world’s biggest economy by 2050. If it sounds as though it’s stealing China’s thunder, well, perhaps it is. But with Beijing’s PM2.5 levels reaching a mega 945 µg/m3 on 30 November 2015 – more than 12 times the national standard – it’s clear there are elements of that legacy that India would be better off avoiding.

No doubt there are academics studying the link between China’s economic slowdown and its clampdown on air pollution – has one made the other possible, or has the latter made the former inevitable? Either way, as the keynote from IA Cement on page 13 shows, China’s cement industry is experiencing a definite slide. Gone are the days of double-digit growth in cement consumption. Prices have fallen and, as elsewhere, there is market consolidation. IA Cement speculates that Chinese cement consumption may have peaked, which will rather skew the worldwide statistics, given that China is responsible for more than half of global capacity. Meanwhile, Chinese equipment suppliers, lacking a domestic market, will continue to venture further afield, which will mean increased competition for the familiar European names. Will cement plants be opting for the technology that saves them the most money, or that which offers greater environmental benefits?

It seems I have started 2016 with the same conundrum I left us with in 2015: the conflicting demands of being environmentally sound and financially stable. Here is hoping 2016 is the year we figure out how to be both.