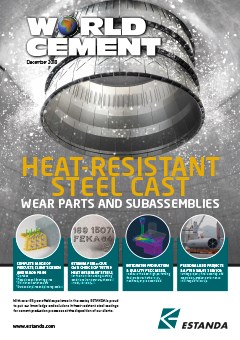 Jair Bolsonaro – the President-Elect of Brazil – is a divisive figure. His views on social and cultural issues are controversial: he has been dubbed the ‘Trump of the Tropics’ by some media for his populist style and use of social media. The business community has been far more positive, however, with markets optimistic that Bolsonaro can bring about an economic recovery.

This would be positive for the country’s beleaguered construction and cement industries. Although Bolsonaro is sceptical of government intervention, there may be some money for expanding and rehabilitating the country’s road network, Raluca Cercel, Associate at CW Group, told World Cement. It is, however, unlikely there will be a big injection of cash into public construction projects. Bolsonaro’s greatest impact is more likely to be in encouraging private investment.

“I think it is safe to say the foreign investors will start crowding again to Brazil, encouraged by Bolsonaro’s hands-off approach regarding business,” continued Cercel. “Usually that has a positive spill over on cement demand from commercial and residential works.”

With this in mind, it has been interesting to see an uptick in M&A activity within the Brazilian cement industry – particularly as this has included investments from two Europe-based multinationals, Buzzi Unicem and Vicat.

Back in early September, Buzzi Unicem acquired a 50% stake in BCPAR, a subsidiary of Brennand Cimentos and owner of two integrated plants, one in the northeastern state of Paraiba and another in the southeastern state of Minas Gerais. Combined capacity of the two plants currently stands at 4.3 million tpy of cement. This was followed in early October by Vicat’s acquisition of a majority stake in Ciplan, which operates a 3.2 million tpy integrated cement plant close to the country’s capital, Brasilia.

The two acquisitions appear to signify changing attitudes towards an industry that has seen a huge contraction in demand in recent years. Indeed, Buzzi Unicem made specific mention of their bullish outlook for the country in the press release announcing the acquisitions: “Buzzi Unicem believes that the current downturn in the Brazilian economy – and in particular of the local cement industry – can be positively resolved in 2019,” the company said. Similarly, Vicat spoke of capturing “the Brazilian market’s growth potential” and of targeting Brazil as an emerging market “benefitting from strong growth perspectives.”

CW Group’s analysis backs this up: the research company anticipates CAGR in Brazilian cement demand of 1.5% to 2023. “We think this year is probably the last one of depressed times for demand in Brazil,” Cercel said.

The good times may then be returning, bringing with them the potential of further consolidation in the Brazil’s fractured cement market. InterCement’s recent sale of its assets in Portugal and Cape Verde, for around €700 million, will free up the Sao Paulo-based company to “inject more capital towards their Brazilian presence through brownfield expansions or acquisitions of the ‘smaller’ operators,” Cercel continued.

“There are still opportunities for national players to get in because we still have small assets that are available, independent operators that might come up – or that already are in discussions,” agreed Robert Madeira, CW Group Managing Director and Head of Research. After some years in the wilderness, Brazil might have found its way.

For our 75th anniversary issue in 2003, we invited experts from the cement industry and the business world to offer comments and predictions on the future and shape of the world cement industry. Almost without exception, the authors took up the challenge. In reading their contributions now, it is interesting that the expressions overcapacity, rise in M&As, continued consolidation, centralisation, environmental challenges, CO2 emissions, the role of emerging markets, and China’s increasing influence were frequently quoted. This is not much different from what you would hear at technical conferences or in the pages of World Cement today!

Much of the talk in the industry continues to be about excess capacities, export prices, freight charges, and the recent spate of M&A activities. In 2017 alone, there were some US$10 billion of transactions closed or agreed. There has been significant M&A activity and consolidation in China and India. Of course, back in 2003 there were M&As, where the larger companies were eagerly picking up smaller independents, as well as eyeing potential opportunities to take over their main rivals. These, as expected, followed in later years. More recently, the European groups have consolidated aggressively, for example Lafarge-Holcim, HeidelbergCement-Italcementi, and CRH-Ash Grove Cement.

Fifteen years ago, four of the top five majors were from Western Europe, whereas today six of the top ten are Chinese companies, with the recently approved CNBM-Sinoma merger heading up the rankings. Such M&A movements were predicted in the 2003 anniversary issue, if not by name, then by implication. In his article ‘Global Business to 2020’, Dr Mike Betts suggested that 52% of global cement consumption in 2020 will be in China. The figure quoted by IA Cement for 2017 is almost 59% and there are still two years to go. While China deals with a slowing cement market, government restrictions on new cement supply, and a decrease in cement exports, its investments and expansion aspirations across Southeast Asia, Central Asia, and Africa are well documented. These, perhaps, could not have been foretold in 2003.

What of the next ten years as we build up to our centenary edition in 2028? Much of the same? Probably. More about China? Certainly. Will the cooling political climate between east and west, the fallout from the trade war involving the US and China, the situation in the EU post-Brexit, or deepening instability in the Middle East drastically affect the cement industry? Quite possibly. But whatever evolves between now and our 100th anniversary, we can agree that Prof. F P Glasser had the right idea when he commented in 2003, “World Cement will, I am sure, remain in the forefront of reporting and interpreting developments for its readership”.