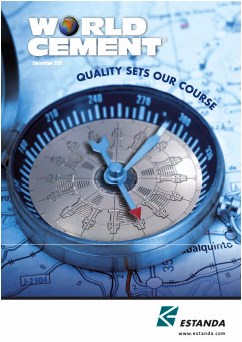 Earlier this year, an environmental group called Beyond Zero Emissions presented a pathway to achieving an Australian cement industry with zero carbon emissions. The pathway is based on five key strategies and claims to be able to achieve a carbon-neutral cement industry within a decade. The strategies include: supplying 50% of cement demand with geopolymer cement; supplying 50% of cement demand with high-blend cements; mineral carbonation; using less cement; and the use of carbon negative cements.

It is an interesting thought exercise, but raises some questions. According to Mark Mutter, Managing Director of JAMCEM Consulting, the fundamental issue is who will pay for the pathway: “For solutions such as mineral capture, I think the cost would be huge. Who is going to pay for that investment? When suggesting geopolymer cements, this would result in the equipment that is currently being used to make portland cement being made redundant.” That implies large-scale write offs by current cement makers, in addition to investment in the new geopolymer cement plants.

Another question around geopolymer plants centres on the ability to scale them up to the same level as clinker production lines – something Mutter questioned. If large-scale production is not possible, it would presumably require investment in lots of smaller units, pushing up production costs.

The pathway tries to get around the issue of cost by noting that “geopolymer cement production does not require a kiln and therefore the set-up cost is relatively low.” But this is not really an answer: they still cost something. It also ignores the financial impact that writing off existing plants would have on cement companies (perhaps negating their ability to invest in new geopolymer plants).

The pathway also suggests that companies could be pushed to invest in geopolymer facilities through the introduction of a national carbon price. Indeed, this appears to be viewed as something of a panacea: “requiring cement companies to pay for their carbon emissions would be a powerful stimulus to widespread uptake of geopolymer and high-blend cements. Paying for cement carbon emissions would also support the use of timber, commercialisation of mineral carbonation, and incentivise the use of less concrete.”

Experience in regions with existing high carbon prices – e.g. the UK – does not suggest this to be so, however, although the UK’s carbon price did not come with legal requirements on the use of low-emission cements, for which Beyond Zero Emissions argues.

Another question centres around energy: “the mineral capture appears to be quite a complex process, which almost seems to add as much equipment to a plant as there is for making cement,” explained Mutter. Beside the issue of where the investment will come from for this new equipment, “preparing the materials for the process also requires energy inputs – so how much is really being saved?”

This question raises a bigger issue: the pathway assumes a 100% renewable energy system to provide power for the new-look cement industry. But renewables provided only 14% of Australia’s electricity in 2016, according to government figures; coal, meanwhile, provided 63% of electricity.

Even within Australia, the pathway would face significant challenges to its implementation. On a global scale (something Beyond Zero Emissions does not claim to address), the challenges identified would be magnified. How then should we view it? It would be too easy to dismiss it as environmentalist idealism. Or a very localised answer to cement’s sustainability challenge. A better approach may be to view its solutions as part of a broad range of strategies that bring a zero-emission cement industry closer. After all, creating a zero-emission cement industry is likely to require as many strategies as possible. For that reason, Beyond Zero Emissions’ contribution to the debate should be welcomed.