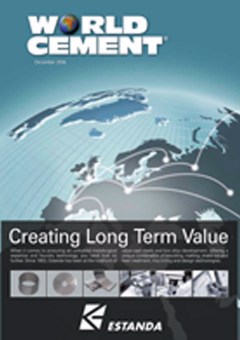 In many ways December brings to a close a difficult year for the cement industry on the back of eight difficult years since the financial crisis of 2007 – 2008. The industry at large has suffered from a lack of confidence and security, worsened by political uncertainty and corporate mergers on a global scale. The tide however may be turning.

Father Christmas came early for shareholders and cement professionals alike this year as the recent spate of Q3 results offered quite the festive treat. Almost across the board, companies are reporting figures well above the same period last year. Such results breed confidence and positivity that will hopefully bolster the industry as we move into 2017.

Dangote Cement declared increased revenue of N442.09 billion in the nine months ended 30 September. This figure was 20.97% higher than the figure recorded during the corresponding period last year. This boost comes despite the harsh operating environment and foreign exchange crises.

Elsewhere, Titan Group’s Q3 results recorded a significant improvement in the nine months of 2016, reflecting the growth of the US market and the improvement of results in Egypt. Cemex also announced that consolidated net sales reached US$3.6 billion during the third quarter of 2016, an increase of 4% versus the comparable period in 2015.

The continued uncertainty surrounding the merger of LafargeHolcim and HeidelbergCement’s takeover of Italcementi has caused much of the hesitancy within the industry. As the details are finalised and the reality of what the deals mean for the industry comes to light, production work can recommence, and with luck, figures will continue to rise. This hope has seemingly already begun to come to fruition as both LafargeHolcim and HeidelbergCement posted encouraging Q3 results.

LafargeHolcim has announced that 2016 represents a year of progress towards 2018 targets, and expects demand in markets to grow at between 1 – 3% for the full year. The company posted solid growth in Q3 coming from both emerging and mature markets with several countries delivering increased earnings.

Likewise, HeidlebergCement offered increased optimism with significant improvement in sales volumes, revenue and operating income after the first-time consolidation of Italcementi. Group revenue was up by 25% to €4.5 billion compared to €3.6 billion last year, the Italcementi integration has occurred much faster than initially expected, and sales volumes are significantly higher than 2015. The outlook for HeidelbergCement’s 2017 is certainly positive.

Have you been witness to this upturn in fortunes? Are we about to see the start of some serious improvements within our industry, or is this positivity short-lived? The New Year is a time for optimism above all else, and we are absolutely seeing that with these Q3 results. 2017 promises much. Whether it delivers on those promises is yet to be seen.

Something else promising a lot for 2017 is World Cement. We have another fantastic editorial programme lined up for 2017 including our new supplement Cement Plants of the Future. As we say goodbye to 2016 I’d like to extend my warmest wishes to all our readers, authors and advertisers. We at World Cement wish you all a prosperous New Year.