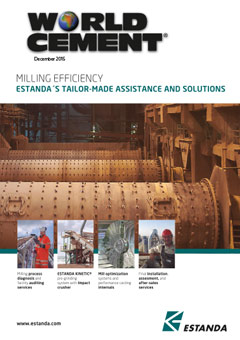 Last month, researchers at Queen’s University Belfast, in partnership with universities in the UK, France, Germany and Argentina, made an exciting announcement: they have created a porous liquid. It’s an innovation in its earliest stages; the scientists behind the discovery say it could be 10 years or more before we gain any real benefit because further research is required, but imagine the possibilities. Liquid with storage potential. It could be the future of CCS, which is a solution many industries – including cement and lime – are pinning their hopes on in the face of increasingly restrictive emissions regulation.

The liquid, a solvent called crown ether 15-crown-5 or (C2H4O)5, is hollow at the molecular level, designed to hold carbon dioxide, methane, nitrogen and xenon. Its significant capacity means it has considerable potential as a carbon storage solution. Professor Stuart James, one of the researchers behind the project, said that the design of the liquid enables it to dissolve an unusually large amount of gas, adding: “the results point to interesting long-term applications”. A liquid solution would presumably be easier to work with than other carbon capture and storage solutions. Of course, in an ideal world, the research would progress from storage to utilisation – storage alone surely cannot be an end point.

No doubt these are the kinds of discussions that will filter through the halls of the Stade de France during COP21 this month. Not since Copenhagen in 2009 has there been such hype around a climate change conference. One can only hope that on this occasion the various governments will agree to stop kicking the can down the road and make real progress towards fulfilling earlier pledges. For those countries currently living with the realities of a warming world, that 2°C target must be a frustration, giving a false impression of time and ‘wiggle room’ when in fact there may be very little.

With China and the US seemingly onboard, this year’s event holds more hope than in previous years, but behind every ‘what’ must be a ‘how’. How can a country cut emissions without stifling growth? Easy enough to show a decrease during a downturn, but is there sufficient technology – is there sufficient funding – to maintain low emission levels in boom times? How does a government prioritise both the economy and the environment without sacrificing one for the other? And for those countries that are newly industrialised or increasingly urbanised, what solutions can the developed world offer to avoid a similar slow path to green technology? Once all possible efficiency measures have been taken, is the future of manufacturing based around mitigation and offsetting, or is there some future innovation out there that will bring radical change to industrial engineering? Perhaps this month I will put my questions on a postcard and mail it direct to the world leaders attending COP21.

While I await an answer, I’d like to extend my warmest wishes to all our readers, authors and advertisers. Thank you for all your support throughout 2015. We have another great programme of editorial lined up for 2016 – including a brand new supplement, Ports & Terminals, so if your subscription is about to expire make sure you visit www.worldcement.com to renew. In the meantime, we at World Cement wish you all a peaceful and prosperous new year.