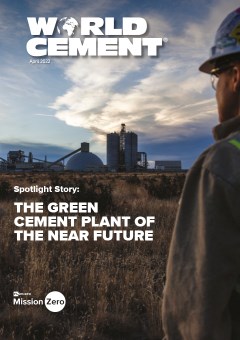 So much for ‘returning to normal’. In my comment for the December 2021 issue of World Cement, I listed a few predictions for the coming year. As might be expected, there was a range of opinions; some forecast a massive rebound in global economic growth, others made more moderate estimates, and many hypothesised the rise of new COVID-19 variants, further lockdowns, and so on.

Many of us had, perhaps naively, consigned the very idea of conflict in Europe to being a relic of the darker days of the 20thCentury. Even after Russia’s illegal annexation of Crimea in 2014, the thought of a full-scale invasion – forgive me ‘special military operation’ – still seemed like an improbable fiction, right up to the point at which it actually happened. Yet here we are in 2022, with millions of Ukrainian refugees heading westwards as their cities fall under siege and their homes, schools, theatres, shops, offices, and hospitals are targeted and destroyed by the Russian military.

The thing about predictions, however, is that they can be wrong in more than one way. Whatever was being planned in the Kremlin, it likely did not include the reduction of Russia to a North Korean-style pariah state with an economy crippled by punishing sanctions, the shattering of the illusion of Russian military invincibility, the revivification of NATO, and the militarisation of the EU. And, notably, many forecasts from both sides failed to anticipate the, frankly, heroic resistance of the Ukrainian people as they continue to defend their home.

Beyond the horrors of the war on the ground in Ukraine, the conflict has had global implications. Energy prices, already climbing to meet resurgent ‘post-Covid’ industrial demand, have seen a further escalation as Europe and the US fast-track plans to permanently wean themselves from Russian hydrocarbons. Brent Crude, the global oil price benchmark, which had long been lingering in the region of US$60/bbl has spent most of the past month comfortably over US$100/bbl with repeated spikes towards US$120/bbl. As consumers look for interim supplies (or alternative energy sources) elsewhere, it seems inevitable that increased demand will lead to increased prices there too. And, of course, all of this comes on the back of rising costs for goods across the board – as I write this, it has been announced that inflation in the UK hit 6.2%, a 30 year high.

What does all this mean for the cement industry? Well, for one thing, many of the goals outlined in the PCA’s Roadmap To Carbon Neutrality have only become more important, especially those focused around moving away from fossil fuels and continuing efficiency improvements. In these challenging times, making the cement industry greener is not only good for the planet, it’s good for the bottom line too.

If you want to discuss how your company is helping the cement industry adapt to the times and thrive, then why not come and meet the World Cement team in person? Drop by Booth 314 at this year’s IEEE-IAS/PCA Cement Conference in Las Vegas (1 – 5 May). I look forward to seeing you there.