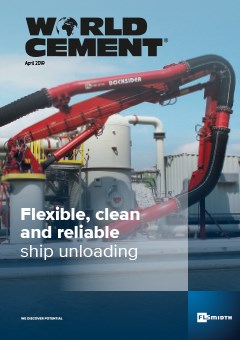 Globalisation, demographic shifts, urbanisation, climate change, and internet proliferation are the “macroeconomic trends that will shape the 21st Century,” according to a new report from Fitch Solutions. “They are global, seemingly irreversible forces that have already made an incredible mark on economies and societies – and will continue to do so for the next few decades.”

These trends present both challenges and opportunities – many of which have been discussed in World Cement in recent years. Internet proliferation, for example, has given rise to the Industrial Internet of Things. Indeed, in this issue, we include a number of articles on this very topic, including an interview with Philipp Leutiger, Chief Digitalisation Officer at LafargeHolcim (pp. 84 – 86).

Climate change is also much discussed within the pages of this magazine. Again, this month is no different: the Global Cement and Concrete Association introduces its sustainability guidelines on pp. 107 – 110, while Lawrie Evans and Mark Mutter of JAMCEM Consulting present their ideas for an environmental ranking of cements on pp. 100 – 101.

Such efforts are important, as climate change is the narrative that is most impacting public perception of businesses and industries. This was seen recently in The Guardian’s recent Concrete Week series of articles. Throughout, the cement and concrete industries were more often than not presented as climate villains: an example of this approach was a chart that indicated that, were the cement industry a country, it would be the third largest emitter of carbon dioxide globally, behind only China and the US.

Leaving aside the fact that such a measure is meaningless (comparing apples with oranges, would be to put it kindly), it highlights a tactic among environmental groups to publicly demonise industries in order to facilitate a transition to apparently greener alternatives. The decline of the coal industry is perhaps the most successful example of this sort of campaign.

The cement industry is, however, a far more complex story than coal. As I have argued in the past, the industry can and should do more to limit its environmental footprint. However, its role in responding to climate change is more than just limiting the negatives: it has a positive role to play. Through its potential contribution to the circular economy, for example, the industry can be a key part of the move toward a sustainable economy. The resiliency of its product also provides a vital tool in building cities that can withstand the extreme weather events that are occurring with increasing frequency.

Ultimately, both environmental groups and the cement industry have to grapple with this inconvenient truth: there simply is currently no alternative to cement and concrete. To return to Fitch Solutions’ macroeconomic trends: as long as the world’s increasing population demands to live in cities, cement will be required. These cities will be smarter, more connected, and greener than in the past – but their foundations will be laid in concrete. The conversation therefore needs to ditch the echo chambers in order to enable real solutions to the most pressing challenges of our time.