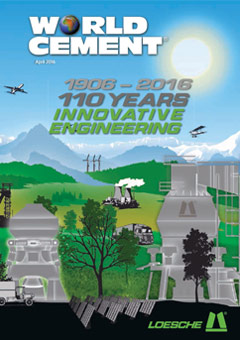 If recent comments released by the European Bank for Reconstruction and Development (EBRD) and McKinsey ever get put into practice, then the cement industry might well benefit in the years up to 2030. The EBRD has welcomed what it terms ‘a new ground--breaking digital platform’, the International Infrastructure Support System (IISS), designed to dramatically speed up the delivery of infrastructure in the public sector across the developing world (January 2016).

The Bank has said that infrastructure investors want to better understand where to invest in emerging markets, which projects are being prepared, and when such projects are coming to market. The global IT solution from IISS seeks to increase knowledge, lower the transaction costs of preparing projects and ultimately holds out the promise of accelerated infrastructure investment. It is said that the system’s comprehensive features would help speed up tenders for infrastructure projects, and ensure that they are awarded and built more quickly. This is of great importance in a world with a rapidly increasing population and enormous infrastructure needs. Just look at urban expansion in China and the European migrant crisis.

The new McKinsey report: Financing change: How to mobilize private--sector financing for sustainable infrastructure, which was published last month, suggests that while business groups, development banks and governments have all pledged significant increases in funding and research for sustainable infrastructure, the scale of the challenge is enormous. From now to 2030 global demand for new infrastructure could amount to more than US$90 trillion, almost double the estimated US$50 trillion value of the world’s existing stock. The world needs to find an extra US$4.7 trillion annually, in addition to today’s US$3 trillion spend, over the next 15 years to pay not only for additional infrastructure but also for sustainable projects which are typically more expensive than traditional ones. McKinsey’s projections show that this sustainability premium could add US$14 trillion to overall infrastructure costs between 2015 and 2030, made up of US$9 trillion in low--carbon power generation and US$5 trillion in energy efficiency. Reduced capital expenditures could result from projected savings of US$6 trillion in reduced fossil--fuel costs, US$3 trillion via more compact urban footprints, and US$0.3 trillion in reduced electricity transmission and distribution.

Of course nobody disagrees over the need for infrastructure investment. Cement manufacturers and other industry suppliers want to hear that finance is forthcoming from the private sector and institutional investors. From the cement industry’s point of view, it could do with a boost after two miserable years of slowdown and fragility. Recent estimates suggest that the prospects for this year may only be slightly better than 2015. The McKinsey report reminds us that at the Paris summit in December 2015, world leaders committed themselves to sustainable economic development and to heightened demands of climate policies. The acceleration of the flow of private capital into sustainable energy, water and transport systems will be a fundamental element of any realistic effort to achieve the ambitious goals touched on earlier. Let’s hope that investors, business groups, development banks and governments are able to fulfil their promises.