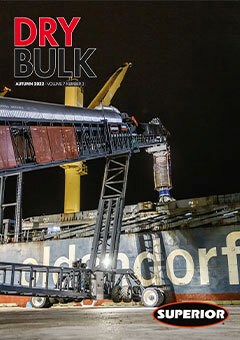 Dry bulk cargoes account for more than one fifth of UK port tonnage with terminals handling 96 million t in 2021. Most of this throughput is imports, feeding renewable energy generation and the construction and manufacturing industries. As the trade association recreating most ports in the UK, including most major dry bulk terminals, the British Ports Association monitors policy developments that have potential to impact the sector.

Biomass accounts for the majority of UK dry bulk trade, with the Drax power station alone burning 8 million t of wood pellets last year. How the UK Government responds to the energy crisis in the short and medium term is likely to have the biggest impact on dry bulk volumes, but there are some trends in other sectors that are already being noticed.

The UK Government’s decision in 2015 to close all coal-fired power stations by 2025 has seen volumes decline dramatically over the last decade. Whilst a new government might be more sympathetic to coal, we do not expect this to reverse the decline in coal volumes in the longer term. However, there could be a minor short-term boost in volumes as some coal plants are put on standby in case of a difficult Winter despite coal price forecasts for 2022 being 80° higher than 2021.

Meanwhile, as some generators have turned to biomass, volumes have increased steadily over the last decade, nearly doubling since 2012. How new UK Ministers respond to the energy crisis will affect whether this growth levels off, as seemed likely a year ago, or continues growing quickly if more coal-fired power stations convert to biomass.

Port throughput ores have declined over the last 20 years, from around 20 million t in 2000 to 11.4 million t in 2021. This may reflect reduced demand from steel and other UK manufacturers and construction industries. Global supply chain issues and other inflationary pressures have dented business confidence generally and in the UK construction sector specifically, despite strong demand. As the UK looks increasingly likely to enter recession, if we’re not already in one, these pressures will likely begin to impact inward volumes in 2023.

The biggest geopolitical event of 2021 has been the Russian invasion of Ukraine which has impacted grain and other Ukrainian exports. Russian aggression in Ukraine has not had a big impact on UK dry bulk volumes, however, as the UK imports little in the way of dry bulk cargoes from either Ukraine or Russia. Indirect impacts may affect volumes as sanctions have affected the price and availability of nitrogen-based fertilizers, and China has suspended urea fertilizer exports to ensure supplies for its domestic use. These developments led to the UK Government pausing plans for restrictions on the use of solid urea-based fertilizers in the UK – mooted in 2018 to lower carbon emissions although industry opposition also played a role. The government agreed to monitor emissions following a self-regulatory approach from the farming industry, but we expect to hear more about this from government in the next five years. Our initial assessment is that government pressure on solid urea fertilizers would increase demand for ammonium nitrate, which could increase volumes through UK ports significantly.

More widely, food and beverage manufacturing remains the largest manufacturing sector in the UK. Raw materials are sourced both from the UK and through imports. Government business surveys suggest that rising costs being felt by businesses are more acute in the food and beverage industry. Prices for imported ingredients are rising faster than domestic ingredients (23% and 14%), according to the Food and Drink Federation, which could impact throughput in 2023.

Get your free issue of Dry Bulk