The 15th NCB International Seminar on Cement, Concrete, and Building Materials was held on 5 – 8 December at the Manakshaw Centre in New Delhi, India. The event attracted more than 1200 delegates, including 90 overseas delegates from 21 countries. Nearly 80 companies also took part in the associated exhibition. 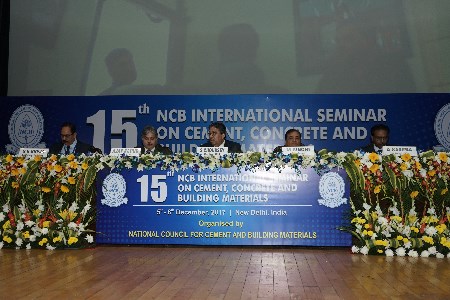 The conference was inaugurated via video link by Suresh Prabhu, India’s Minister for Commerce and Industry, who drew attention to the country’s depleting limestone and other resources. The minister called for conservation of these natural resources through the development of alternative building materials, while also asking the cement industry to make use of alternative fuels and raw materials.

Speaking in his presidential address, Dr S. Chouksey, Chairman of the NCB and Director of JK Lakshmi Cement, pointed to the current overcapacity within the cement industry in Industry, which currently stands at around 100 million t. Outlook for demand is more positive, continued Dr Chouksey, noting that a number of Indian government policies, including the Make in India, Clean India mission, and 100 Smart Cities programmes, have the potential to spur cement demand to over 600 million t in 2022.

Further keynote presentations including one from Ajay Kapur, Managing Director of Ambuja Cements, who provided ‘The Industry Perspective’, while Mahendra Singhi, CEO of Dalmia Cement (Bharat) spoke on the ‘Future Outlook and Challenges’.

Both also picked up themes mentioned by the minister. Kapur noted that thermal substitution rates for alternative fuels at Indian cement plants is currently around 4%, compared to 40% at European cement plants.

“I am positive that the cement industry can provide a permanent and sustainable solutions for waste management,” said Kapur. “This is why it is imperative for government support in the form of policy initiatives to promote the use of alternative fuels and raw materials.”

Singhi meanwhile commented on the underutilisation of flyash in India, noting that some 100 million tpy remains unused today, with a significant increase in flyash production from the coal-fired power industry expected in the next few years. “There is a huge potential for utilising flyash by the cement plants, which will not only help the environment, but will also help release significant areas of land from having to be used as dumps by the thermal power plants.”

On the technical side, Ashutosh Saxena, Director General (Acting) of the NCB provided ‘A Technological Perspective on the Cement Industry’, with almost 200 additional technical papers in 25 sessions also being presented at the conference. In addition a special technical session and panel discussion was held by the World Business Council for Sustainable Development at the event.

National Awards for Energy Efficiency, Environmental Excellence, and Quality Excellence rounded off the event with Dalmia Cement picking up six awards: four for the Dalmiapuram plant and two for the Aliyalur plant. UltraTech Cement’s Kotputli and Vikram plants were also among those plants recognised by the NCB.

Read the article online at: https://www.worldcement.com/indian-subcontinent/21122017/ncb-international-seminar-takes-place-in-new-delhi/