LafargeHolcim subsidiary in India, LafargeHolcim, has spearheaded skill development among rural youth in Rajasthan, delivering training to over 10 000 young people so far. The company’s operates a Skill and Entrepreneurship Development Institute (SEDI) in Rajasthan as part of its CSR arm, Ambuja Cement Foundation. 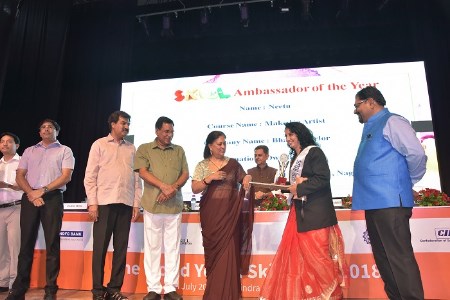 Rajasthan’s Chief Minister Vasundhara Raje congratulates Neetu, a SEDI graduate, who has been selected as the Skill Ambassador 201’ for the state.

“Skill development is a powerful tool to empower individuals and transform their lives, expecially at a time when the country is leaving its mark in the intensified global competition,” said Ambuja Cement’s Managing Director and CEO, Ajay Kapur.

A graduate of SEDI, Taufique Ahmed, was recently recognised by Indian Prime Minister, Narendra Modi, on a visit to the state. Ahmed, who studied hospitality at SEDI, is now employed in Riyadh, Saudi Arabia.

Another SEDI student, Neetu, was also recently recognised by the Chief Minister of Rajasthan, Vasundhara Raje, as Skill Ambassador 2018 for the state. Meanwhile, two other SEDI trainees – Shankar Godara from Nagaur and Pradeep Bagari from Chirawa – received the Skill Icon Award.

The recognitions by the Hon. Prime Minister Narendra Modi as well as Rajasthan’s Hon. Chief Minister Vasundhara Raje serve as a huge encouragement to us and stands a testament to the fact that our efforts are in the right direction,” continued Ambuja’s Kapur.

In total, 40 000 underprivileged youth in rural and semi-urban areas has been trained at 27 SEDI centres around India. SEDI centres offer short courses in various trades from 12 different sectors, as well as computer literacy programmes, and vocational skills training.

According to Indian government figures, the country will need about 109 million more skilled workers in 24 key sectors by 2022, while 12 million youth are likely to enter the labour force every year over the next two decades.

Read the article online at: https://www.worldcement.com/indian-subcontinent/20072018/ambuja-cement-supports-youth-skills-development/

With shredded waste rapidly becoming more of a commodity, Dr Matthew Goodwin, Waste Knot Energy, considers what the future holds for the fuels of the cement industry.