When AUMUND India opened up 20 years ago in Chennai it was a small sales organisation of only 6 people. But since then it has grown and developed to such an extent that it now includes engineering, software development, manufacturing, and exports of engineering services and components among its activities, and comprises 50 people. 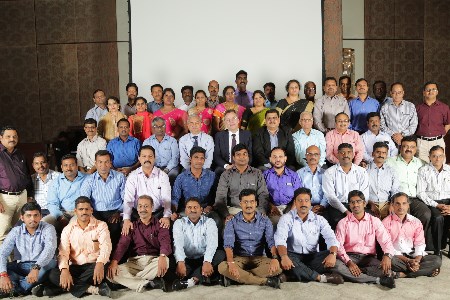 A.D. Prasad Rao and Raju Gupta were the two key personnel who started the operation. At the time both had business backgrounds in the cement industry, Prasad Rao more in marketing and Raju Gupta in project management and engineering. Together they operated as joint Managing Directors until 2012, when Prasad Rao retired from executive duties, but the business has continued to rely on his experience since then as a Board member. Raju Gupta, meanwhile, has operated as sole Managing Director since Prasad Rao’s retirement.

AUMUND India has achieved several notable milestones over the course of its first 20 years; initiating Calculation and Parametric Programming, Project Engineering for major cement plants, RDM localization, and production of Elevators, Pan Conveyors, Silo discharge gates, Samson® Feeders and Scraper Conveyors, sold by AUMUND subsidiaries around the world. Within the global AUMUND Group, AUMUND India has become the second technical centre outside of AUMUND Fördertechnik GmbH in Germany. It is expected that AUMUND India will play a bigger role in future in supporting the Group, especially in Engineering and Project Management.

Read the article online at: https://www.worldcement.com/indian-subcontinent/05122016/aumund-india-celebrates-20-years-of-successful-business/