Ask any cement plant manager about the clinker cooler in his plant, and he will immediately say that it is an integral part of the kiln line. As a result of the counter-current flow operation of the burning process, the cooler operation has a crucial impact on the operating performance, especially on energy consumption, clinker quality and the productivity of the whole clinker line.

Clinker has to be cooled rapidly to ensure a phase composition that provides appropriate cementitious properties. The heat exchange between the clinker and air must be efficient to bring about proper cooling, while maximising heat recovery to secondary air and tertiary air, and the related process requirements. Thus, the modern cooler must accomplish all these tasks efficiently and simultaneously.

The development of clinker coolers in recent years has been prompted by the overriding requirements to reduce energy consumption, provide optimum cooling rates for good quality clinker and minimise the impact on the environment. Other obvious requirements include reliability, low maintenance costs and minimum downtime.

An existing PSP grate cooler at the CEMMAC cement plant in Hornié Srinie (Slovakia) is currently being replaced with a new FTI cooler from the Danish company, Fons Technology International. The upgrade will lead to an improvement in clinker production efficiency and at the same time reduce operational costs. The FTI cooler is a revolutionary concept that results in reduced maintenance costs, self regulating aeration and the absence of snowmen. Its main advantages are:

FTI has given performance guarantees as follows:

CEMMAC is confident that these guarantee parameters will ensure a very short payback period (less than 4 years) for the investment. The new erection concept, which utilises a modular design, decreases the installation time, allowing CEMMAC to install the new cooler during normal maintenance, i.e., during this winter’s overhaul in January 2012.

FTI’s founder and chief developer, Mogens Fons, since leaving FLSmidth a few years back, has been involved in the development of this cooler, which he calls the ‘4th generation clinker cooler’. His company currently has licensing agreements with TCDRI in China and with a company in India.

It was while he was with FLSmidth that Fons became involved with the development of the Cross-Bar cooler technology first introduced in the late 1990s. The Cross-Bar cooler is designed not only for completely new coolers, but also as an upgrade for most existing coolers. FLSmidth’s latest development is the FLSmidth Cross Bar™ cooler. The prototype was installed at Capitol US and went into operation in March 2010. It was introduced into the market in September 2010.

Descriptions of projects involving replacement of the vital parts of existing equipment for kiln no. 6 at Sebryakovcement in Russia, and the reconstruction of an old decommissioned cooler at Volyn Cement in Ukraine, were published in the May 2011 issue of eHighlights. At the Russian plant, the kiln was shut down for 37 days, during which period all internal parts were stripped from inside the casing of the old East German cooler and replaced with Cross-Bar™ cooler equipment. The system was supplied with five new cooler fans and an HRB roller breaker. The new installation now prevents frequent stoppages from limiting the overall capacity of the kiln. After commissioning, the cooler performance exceeded the performance guarantees, cooling the clinker down to 24 °C above ambient with a cooler power consumption as low as 4.7 kWh/t.

At the Volyn plant, the plan was to increase the kiln output by 20%, but the old decommissioned cooler would then be the bottleneck on production. Space under the kiln was very constrained, and a new cooler was not an attractive option, as it would have required considerable civil works. FLSmidth came up with a custom-made solution in which only the first part of the cooler was modified with Cross-Bar technology and only minor adjustments were made to the cooler lining and the kiln hood. This minimum of modification to the existing equipment was sufficient to secure the required cooler cap.

Moving from Danish engineering to German expertise, ThyssenKrupp Polysius introduced its POLYTRACK® cooler in 2002 and since then it has sold more than 60 worldwide. Some 10 have been supplied into China and in July 2010 the first two POLYTRACK®s began operations in the country. The installations in China have capacities that range between 5000 and 5500 tpd. In August, Podilsky Cement (part of the CRH Group) announced that it had successfully brought on line its 7500 tpd clinker production facility at Kamenets-Podilsky, Ukraine. ThyssenKrupp supplied much of the equipment for the country’s largest clinker production line, including a POLYTRACK®. In the following month, Polysius announced that it had won the order from Les Ciments de Bizerte in Tunisia to modernise and increase production of the kiln line in Bizerte from 2000 to 4000 tpd. The turnkey project will include the replacement of the existing planetary cooler with a POLYTRACK®.

At the end of September, Claudius Peters received the order to supply an ETA cooler to replace the existing cooler at the Holcim La Union plant in the Philippines. Its capacity will be 2800 tpd. Earlier in the year, Claudius Peters won the order to replace the old satellite cooler at Holcim’s Untervaz plant in Switzerland with a 2100 tpd ETA cooler. This order follows a previous one for the installation of a similar cooler at Holcim’s Eclepens plant, also in Switzerland.

In 2005, KHD Humboldt Wedag successfully launched the PYROFLOOR® clinker cooler. It introduced a combination of proven technologies, such as walking floor and cross-flow cooling enhanced by patented self-regulating aeration valves. At the end of 2008, Askale Cimento ordered a PYROFLOOR® cooler for the Erzurum kiln line II plant, and in July of this year KHD received an order from the same company for a complete 4000 tpd kiln line, including a PYROFLOOR® equipped with a hammer-type clinker crusher and controlled by a PFC control system to be built near the town of Gümüshane in the North-East Black Sea region in Turkey.

Last year IKN was much involved with a particularly interesting conversion at Italcementi’s Matera plant in Italy. The switch from the semi-dry process to the dry process involved the installation of a new 5-stage preheater with calciner to replace the existing grate cooler and a new clinker cooler. The existing kiln was retained, but with some small modifications. The new burning process combines in one integrated unit the drying and grinding of raw materials and clinker burning system, thus permitting a significant reduction of thermal and power demand. IKN was responsible for the entire conversion. The company provided the new cyclone preheater, calciner with separate combustion chamber and state-of-the-art SNCR technology. In addition, IKN carried out the engineering and subcontracting for the raw meal silo, kiln and cooler dedusting, plus the detailed engineering for the Pfeiffer raw mill circuit, e.g.: duct work, material transport and steel structures. The mill was a direct contract between Italcementi with Pfeiffer. Italcementi has reported that significant benefits for the environment have been obtained with the introduction of the new development technology. This has led to a 98.7% reduction in sulfur dioxide, a 72% reduction in dust, a 42.8% reduction in sulfur oxides and a 21% reduction in heat consumption. The production capacity has been increased to 2200 tpd of clinker.

The plant was inaugurated in July of this year. A full description of this project will appear in a later issue of WORLD CEMENT.

This is an abridged version of the full article from Paul Maxwell-Cook, which was published in the November 2011 issue of WORLD CEMENT. To read more download the issue now (subscribers only).

Read the article online at: https://www.worldcement.com/europe-cis/31102011/cooler_options/

FLSmidth has signed an agreement to acquire the assets of the privately owned company Knelson, a Canada based corporate partnership that is active within the minerals industries.

Paul Maxwell-Cook looks at how waste heat recovery projects have taken off in the cement industry.

Lafarge has agreed with Boral to sell them its stake in their common Asian Gypsum joint venture for €429 million. 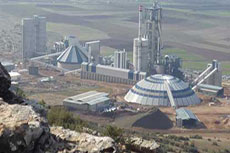