The Federation of Master Builders (FMB) is urging young people to consider a construction apprenticeship as an alternative to doing A-Levels. The industry is experiencing a serious skills shortage and is looking to replace the 390 000 construction workers that left the sector during the recession and the 410 000 workers that are due to retire over the next five years.

Sarah McMonagle, Head of External Affairs at the FMB, said: “Now is the perfect time for young people to enter the construction sector. Research indicates that there will be 182 000 new jobs created in the building industry in the next five years and that 120 000 will need to be apprentices. To top that off 43%, of employers nationally agree that they would be more likely to offer an apprenticeship than they were two years ago.”

Former FMB Apprentice of the Year and Managing Director of Ware Construction, Chris Ware, commented: “From personal experience I can say that apprenticeships are an excellent route for school leavers. I finished my apprenticeship in carpentry in 2007 after leaving school at 16 when I finished my GCSEs. I started my own company in 2010 in the midst of the recession and I now employ seven full-time members of staff along with seven sub-contractors and I own four vans and a variety of machinery.”

The FMB is currently considering 14 young apprentices to win this year’s apprentice of the year award as part of its Master Builder of the Year awards programme.

Read the article online at: https://www.worldcement.com/europe-cis/27082014/fmb-urges-young-people-to-consider-construction-apprenticeships-357/

Over 900 young people will begin their apprenticeships with ThyssenKrupp on 1 August or 1 September 2014. 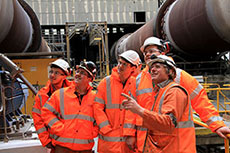 The construction industry in the UK saw strong growth in October 2013; however, future growth will rely on increased employment and training of young people.