Euro Auctions, the UK’s largest auctioneers of construction machinery and industrial equipment, has acquired a new permanent auction site in Zaragoza, Spain, which will see its first sale on 25 February 2015.

Located at Zuera, Zaragoza, Spain, the new site has a central location less than 250 km away from the key markets of Madrid, Barcelona and Southern France. The site offers easy access to major ports like Santander, Bilbao and Barcelona, which is extremely important in the equipment market and is directly serviced by the railway network.

The 85 acre site was previously used as a car storage and preparation area, and so already has all the associated features that will allow for a smooth transition into an auction facility. It also has excellent potential for future development to further enhance the auction experience for both buyers and sellers alike.

“Spain is an important and expanding market for Euro Auctions and we continued to look for the right site that allowed access to other key markets either through various ports or internal motorways,” commented Jonnie Keys. “This, coupled with the excellent facilities offered at Zaragoza, was fundamental in our decision to relocate to this region, not to mention having Madrid and Barcelona, the two largest cities in Spain, within a 250 km commute.”

Euro Auctions has been successfully conducting agricultural and construction machinery auctions in Spain since 2010 from its Valencia site, but continued company growth has meant moving to this new location with its improved facilities and infrastructure, coupled with the proximity of the large French market.

Read the article online at: https://www.worldcement.com/europe-cis/27012015/euro-auctions-launches-spanish-site-211/ 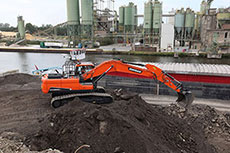 Adare Machinery has been appointed by Doosan Construction Equipment as a new authorised dealer for Doosan Heavy and Bobcat products in Ireland. 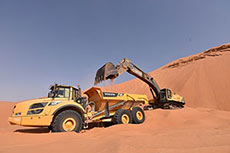 Saudi Arabia has built the first ever highway through the world’s largest and most barren desert – the Empty Quarter – built with the help of a fleet of 95 Volvo machines.

Proxibid, an online marketplace for construction, commercial and industrial equipment, has expanded into the UK market with new offices in London.