The two parties met at Eurocement’s headquarters to exchange ideas on cooperation for the construction of a machinery manufacturing base in Ulyanovsk Oblastand and on all-round cooperation in building material fields such as gypsum board, glass and new housing. The companies reached common consensuses on a wide range of issues. Accompanied by Eurocement President Mikhail Skorokhod, the delegation then visited Ulyanovsk and met with Sergey Ivanovich Morozov, Governor of Ulyanovsk Oblast.

During its stay, the delegation additionally visited Li Hui, the Chinese Ambassador to Russia. The company introduced its latest developments in fields such as cement, glass, new energy and new housing, in hope that the embassy would offer support for CNBM's development in Russia. The plans were well received and the two sides exchanged ideas on a wide range of issues, such as the development opportunities and prospects of Chinese enterprises, especially Chinese building material enterprises, in Russia.

Read the article online at: https://www.worldcement.com/europe-cis/26082014/cnbm-chairman-visits-eurocements-russian-headquarters-355/ 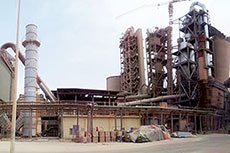 China’s CNBM has carried out its first upgrade project on a clinker line overseas, helping Oman Cement Company to increase the capacity of its production line 1, which is located southwest of Muscat.

Eurocement says it will defend its assets in Uzbekistan, estimating that the loss of Akhangarancement could equate to up to US$1.4 billion.

Eurocement has signed a number of contracts with the Sinoma, CNBM and Sinomach Groups for the supply of equipment to new cement plants in various regions of Russia.