After nearly 20 years of construction, the Gotthard Base Tunnel in Switzerland will be officially opened on 1 June. Construction chemical products from BASF helped make the construction of the world’s longest rail tunnel possible. “We are proud that we were able to contribute our innovative solutions and know-how to help our customers master the challenges of this monumental construction project,” said Ralf Spettmann, President of the Construction Chemicals division at BASF.

The 57 km Gotthard Base Tunnel was built with around four million metric tons of concrete – roughly 40 times as much as was used in Burj Khalifa, the world’s highest building. BASF supplied concrete admixtures, cement injections to stop water ingress, and fire-protection mortar for the tunnel construction project.

Long distances and high temperatures in the tunnel

In the 20 km section between Erstfeld and Sedrun, the two parallel tunnel tubes and the connecting galleries that link the two tunnels approximately every 300 meters were built using BASF concrete admixtures. “In underground construction, there are contradictory demands on concrete: While being transported several kilometers deep into the mountain, it has to remain workable for hours and cannot solidify. But the concrete also has to set almost immediately when sprayed onto the tunnel wall. In the Gotthard Base Tunnel this was one of the greatest challenges,” said René Bolliger, head of the Underground Construction unit at BASF for Germany, Austria and Switzerland. This was made possible thanks to the right combination of BASF concrete admixtures: MasterGlenium superplasticisers make the concrete especially flowable and workable, while shotcrete accelerators from the MasterRoc SA product range cause the concrete to solidify and harden within seconds after being sprayed on the tunnel wall. Furthermore, BASF developed an admixture in the MasterSet product family especially for the construction of the Gotthard Base Tunnel which considerably slows down cement hydration. In combination with the BASF superplasticisers, it ensured the concrete could be used optimally even after being transported long distances and exposed to the high temperatures in the interior of the mountain. The system of superplasticisers and retarding agents was used for initial securing measures after excavation as well as during the concreting of the inner shell. “We are constantly working on innovations to make our customers even more successful. Our latest example for underground construction is MasterEase UG 3904. One advantage of this plasticiser is that, when paired with an alkali-free shotcrete accelerator, it is even easier to mix and pump,” said Bolliger.

Two vertical shafts descend more than 800 m from the mountain village of Sedrun into one of the two multifunction stations in the tunnel, which serve as emergency stops and house ventilation equipment and other technical infrastructure. BASF solutions can also be found here: Just like the tunnel, these were first secured with sprayed concrete and then outfitted with a wall of poured concrete. “Transporting the concrete via a vertical downpipe through the shafts was particularly challenging. We had to make sure that while the concrete fell down, its components did not segregate from each other,” explained Bolliger. By choosing the right MasterGlenium concrete superplasticizer and finding the optimal dosage for the application conditions, BASF experts ensured that the concrete was still easily workable after falling freely for several hundred meters. To prevent water ingress, the microcement MasterRoc MP 650 was also injected into rock crevices and cavities.

Fires are a major danger in tunnels and there are strong fire safety requirements. If concrete gets hotter than 1000°C, it loses its load- bearing capacity and the tunnel collapses. The wall of the Gotthard Base Tunnel near the south portal was therefore coated with a special fire protection mortar, MasterRoc FP 1350 from BASF. “With this product, the tunnel walls can withstand temperatures of up to 1400°C for at least 90 minutes. This is valuable time for fire-fighting operations,” said Frank Clement, a BASF expert for fire protection solutions in underground construction.

The Gotthard Base Tunnel is the longest rail tunnel in the world and cost around €9 billion to build. This route through the Alps will reduce travel time between Zurich and Milan by around one hour. The slope of the tunnel was reduced considerably; the highest point (550 m above sea level) is only 90 m higher than the northern portal in Erstfeld. As a result, freight trains can carry twice as much weight and travel twice as fast through the tunnel. In comparison, the old Gotthard railway has to cover a height difference of around 700 m between Erstfeld and the apex of the first Gotthard Tunnel, which opened in 1882.

Read the article online at: https://www.worldcement.com/europe-cis/25052016/basf-products-construction-world-longest-tunnel-168/

BASF has extended its portfolio of Master Builders Solutions® in Russia.

This is BASF’s first construction chemicals plant in West Africa. 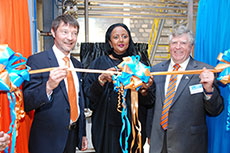 BASF has opened a concrete admixture facility in Nairobi, which will help it to better serve the growing East African market.

BASF has launched the Master Builders Solutions brand in emerging markets across the CIS, Russia and the Middle East.