The positive growth rate for seaborne transported containerised goods on the trans-Pacific trading lane is supporting the spot rate level to extend its strong recovery from 2011 also going into Q4, but trading conditions on the Europe-bound trading lanes are much harsher, as volumes are shrinking.

In the Pacific, the US West Coast-bound container volumes have grown by 1.2% in the first eight months, despite the fact that July and August have contracted on a y-o-y basis down 1.4% and 1.0% from the same month last year. Should the slowdown continue for the rest of the year, estimated annualised growth will then end up at just +0.7%. 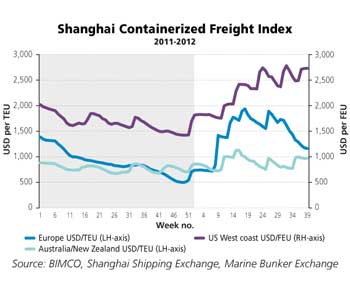 Spot freight rates on the three trading lanes illustrated in the graph, representing in total 45% of export volumes out of Shanghai, have fared quite differently in 2012 as compared to the simultaneous paths last year. While strong rate evolution is seen in both Europe and US West Coast trading lanes until mid-year, the higher rates only proved sticky on the US-bound trades. This pattern is duplicated for the vital US East Coast trading lane. For the moment, there is a lot of focus on the mismatch between supply and demand on the European trade, as the anticipated higher volumes during Q3 peak season did not materialise.

From being ahead of the slowdown in demand by reducing deployed capacity on the Europe-bound trades in the earlier parts of the year, container line operators now find themselves caught behind by not having adjusted capacity fast enough to the drop in demand.

The containership fleet deliveries during 2012 have just surpassed the 1 million TEU mark, resulting in a fleet growth of 5.1%, when you take into account the 216 000 TEU that has left the fleet for demolition. For the full year of 2012, BIMCO forecasts the containership fleet to grow by 7.2%, with the fleet shifting towards larger vessels. 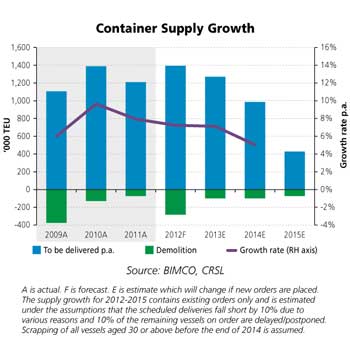 The expected supply growth is constantly slowing down from the high point at 9.7% in 2010 to an expected 7% next year. Being instrumental in this positive trend is the holding back of new orders by ship owners across the board. For container shipping, this is proven by just 46 new orders placed during 2012. The industry is heading for the lowest contracting level on record, second only to the exceptional 2009. However, the recent three months have delivered the lion’s share of these 46 orders, with a handful of significant orders done at large scale, with 4 to 10 vessels contracted en bloc. 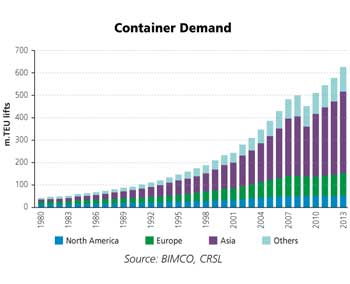 The demand side is causing the headache in the containership business. The demand-gap in the container shipping market was created mainly in 2009, and it is the loss of that volume growth that still puts pressure on the market balance. The gap between the so-called ‘trend growth’ now (after-2008) and then (until-2008) is pretty illustrative of the challenge the industry is facing. Making sure that the virtual supply matches actual demand is the key to return to sustainable freight rates, bearing in mind that actual supply is not about to get utilised at full speed anytime soon.

Looking forward, the next round of announced freight rate adjustments are due 1 November; half of the operators on Far East to Europe have set a target on a freight rate lift at approximately US$ 500/TEU. Some operators already see a 25% implementation of this as a success, given the recent steep drop in volumes and the subsequent miss-match between deployed capacity and transportation requirements.

From the start of the year until May, owners ‘reactivated’ parts of the idle fleet, as the market was ready for it. Since May, owners have resumed the use of the ‘idling-tool’ to a larger extent, once again as a response to the lower demand growth. The idle containership fleet stood at 550 000 TEU (3.4% of the fleet) at 24 September, up from around 420 000 TEU in May.

Alphaliner estimates that operators on the Far East to Europe/Mediterranean trading lanes need to cut deep in deployed capacity to reach a new market balance. BIMCO subscribes to this view, adding that it remains a difficult task to maintain a market balance when the demand suddenly contracts as fast as has been the case in FE-Europe over the summer, leaving freight rates in limbo. Before confidence is restored in European consumers and European sovereign borrowers ability to pay its dues, container shipping demand will be held hostage to the solving of the matters at hand.

This is the final part of a four-part summary of the BIMCO Shipping Market Overview & Outlook 2012-13. The full report can be accessed here

Read the article online at: https://www.worldcement.com/europe-cis/24102012/bimco_container_shipping_part_4/

As the return of a strong market seems remote, asset prices are softening further. Many new orders have surfaced as ‘ECO designs’.

Demand is still growing slower than the fleet is. However, with Chinese stimulus and winter just around the corner, this sliding trend in freight rates could reverse.

Peter Sand explains how macroecomics are moving more firmly but still slowly in the right direction as recent actions support the moderate positive outlook for 2013 and onwards. However, many uncertainties remain to be dealt with.