The most popular story of the year came from a relatively unlikely source – for the cement industry, at least. NASA developed a simulation of how CO2 moves through the Earth’s atmosphere and provided a video of ‘A Year in the Life of Earth’s CO2’.

Unsurprisingly, the confirmation that Holcim and Lafarge were considering a merger was the second biggest news story of the year. Subsequent stories outlining details of the merger were also within the top 20 news stories of 2014.

Pakistani cement prices on the up

News that cement prices were on the rise in Pakistan, attributed to increased production costs, became the third most popular story of 2014. Published in February, further stories throughout the year highlighted the increased pressure on margins arising from higher energy prices.

Argos increases its presence in Florida with acquisition

Colombia’s Argos Group has been on the acquisition trail this year, and in January purchased cement and concrete assets from Vulcan Materials. Cementos Argos has really expanded its US presence in 2014, with various acquisitions.

News came in the summer that Lafarge Pakistan Cement Ltd would be purchased by the UK’s Bestway Cement Group, a story that made that top-5 news items on the website in 2014.

World Cement put together an infographic laying out the early plans for the Lafarge-Holcim merger and it obviously proved popular, becoming the sixth most viewed article of the year.

Indian ratings agency ICRA published a report in March citing pricing pressures and economic headwinds as challenges to the Indian cement industry. Despite rising production costs, the industry picked up in the summer following the historic elections and will no doubt give us plenty to talk about in 2015.

Interestingly, this is the only article in our top ten that looks at cement itself, as opposed to the business side of the industry. Konark Cement launched a new cement grade in April designed for roof casting and high strength applications with limited space.

Cement dispatches increased by 3.5% in Colombia in 2013

A look at cement statistics in Colombia, showing an increase in sales volumes proved to be our only South American story in the top 10.

This article, abridged from a report by our own Paul Maxwell-Cook for the February 2014 issue of World Cement, came in at number 10, with news from Thailand, Myanmar, Laos and Cambodia.

We look forward to bringing you more great stories and a fresh new look in 2015. Happy New Year to all and thanks for your support in 2014.

The Board of Directors of UltraTech Cement Limited agreed to the acquisition of certain cement businesses of Jaiprakash Associates Limited.

CRBC has signed agreements with ARM Cement and Bamburi Cement, and is negotiating supply contracts with other local manufacturers, for the construction of the Standard Gauge Railway. 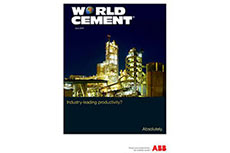 We wanted to know what your favourite cover was from the past two years (January 2013 – December 2014), and the winner is the June 2014 cover from ABB!