The Mineral Products Association (MPA) – the trade body representing the aggregates, cement and concrete industries in the UK – has made renewed representations to government, particularly the Roads Minister, Andrew Jones MP, to introduce regulation for volumetric concrete mixers.

Volumetric concrete mixers are responsible for at least 10% of concrete deliveries. According to the MPA, these are significantly under-regulated but deliver approximately five million t of concrete to UK construction sites annually.

Volumetric concrete mixers are essentially heavy goods vehicles (HGVs) which are fitted with equipment to transport the materials required to make concrete, mixing the concrete at the customer site. Whilst truckmixers, which deliver ready-mixed concrete, are subject to full HGV regulation, due to a long-standing legal loophole, Volumetric concrete mixers are regulated as engineering plant rather than HGVs.

If these mixers were classified as HGVs, they would be operating in excess of the 32 t weight limit that is applied to equivalent HGVs, since these vehicles often to weigh over of 40 t.

For safety reasons, all HGV drivers have to obey strict limits on their hours of work and the vehicles are fitted with tachographs to monitor this. Volumetrics drivers are not subject to the drivers hours limits enforced for HGV drivers.

Moreover, volumetrics drivers are not required to have HGV driving licenses since they are not currently part of the Operator (O) licensing regime. This means that businesses that only used volumetric concrete mixers do not need O licenses and are not regulated by the traffic commissioners. Their operations cannot be stopped according to HGV regulations, unlike that of HGVs.

Nigel Jackson, Chief Executive MPA, said: “Currently, five million t of concrete annually are being delivered by HGVs not subject to HGV weight limits, drivers’ hours rules or Operator Licensing. It is becoming increasingly absurd that two types of vehicle delivering concrete to customers, have such different regulatory requirements. Both ready-mixed concrete truckmixers and volumetric concrete mixers are HGVs operating on public roads and should be subject to the same regulations as any HGV. The fact that volumetric concrete mixers operate to weights up to 50% greater than equivalent HGVs and there are no limits applied to drivers hours for vehicles of this size is simply ridiculous.”

He added: “The MPA has been urging Government to apply fair and reasonable HGV regulation to the operation of volumetric concrete mixers since 2010. Successive Transport Ministers have taken no action, but Department for Transport consultations in early 2015 raised the possibility of HGV weight limits being applied to volumetric concrete mixers and volumetric operators being required to obtain Operator (O) licenses.”

Read the article online at: https://www.worldcement.com/europe-cis/23072015/uk-mineral-products-association-government/ 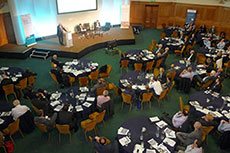 More than 130 high level delegates from over 60 MPA producer and associate member companies attended the event.

The UK’s Mineral Products Association and the Bumblebee Conservation Trust have renewed the memorandum of understanding that they originally signed in 2012.