The Concrete Centre’s annual student competition, in partnership with Laing O’Rourke has been won by a team from University of East London. The 2016 competition brief for teams of engineering students was to design a roof-top swimming pool around a number of difficult design constraints.

The winners were announced at a prize-giving ceremony at The Concrete Centre’s autumn seminar held at IStructE on the 15th September. The winners were also invited to a celebratory dinner with the competition sponsors’ Laing O’Rourke and the competition judging panel of Sam Wong, Careys Construction; Roger Hewitt, Arcadis; Muiris Moynihan, Laing O’Rourke and Jenny Burridge of The Concrete Centre.

The 2016 competition attracted entries from across the UK schools of engineering and there were three prize categories. The winners were:

The competition brief was to design a roof-top swimming pool and the design constraints, including a requirement not to have a vertical structure within 3m of the adjoining structures to the east and west, proved to be a tough challenge. Jenny Burridge, judge and head of structural engineering at The Concrete Centre said “We were delighted at the number of entries in to this year’s competition, but the brief proved to be tough, and judges were looking for those that made a good attempt at providing a working solution addressing all the design considerations”.

It was the first time that the winners, University of East London, entered the competition and their submission stood out. Judges described the design as a having a simple and effective layout, using a split level scheme for the car park and even adding a lower half level to maximise the number of car parking spaces. The problem of the cantilever at each side of the building was minimised by putting a line of support on the 3m minimum dimension, with ramps supported by a spine wall. Jenny adds “The judges were impressed, as the load transfer was well understood, with good schemes that had been well thought through.”

The runner-up was Queen’s University Belfast. The judges’ feedback on this submission was that it demonstrated good understanding of vertical and horizontal load paths, with a well-considered foundation solution, appropriate to the site. The perforated precast concrete cladding, designed to look like climbing plants also attracted the judges’ attention. This submission, also won the prize for the best sustainability appraisal.

Read the article online at: https://www.worldcement.com/europe-cis/22092016/structural-concrete-competition-winners-announced-312/ 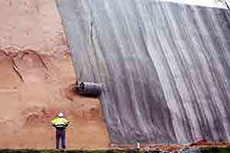 MPA The Concrete Centre explains how, because of concrete’s inherent material properties, it can be used to minimise fire risk for the lowest initial cost while requiring the least in terms of ongoing maintenance.

MPA The Concrete Centre has partnered with Laing O'Rourke to provide a student competition for engineering students across the UK.