In the 2014/2015 fiscal year thyssenkrupp further enhanced its performance, again achieving significant improvements in its main financial indicators. Adjusted EBIT from continuing operations climbed by 26% to around €1.7 billion and was thus at the top end of the company’s previously raised guidance. This improvement can be credited to extensive efficiency measures. The official target of €850 million for effects from these measures was significantly exceeded at €1.1 billion.

Net income improved by 37% to €268 million. The primary target from the past fiscal year was to achieve positive free cash flow before divestments – this is the first time since 2005/6 that this has been achieved, with a positive FCF before divestments of €65 million.

“That marks a further milestone in our transformation,” said Dr. Heinrich Hiesinger, CEO of thyssenkrupp, at the Annual Press Conference.Hiesinger continued: “We have delivered on our promise. We have stabilised thyssenkrupp and further advanced the integration of the Group.” However, the CEO of the Essen-based industrial group also emphasised that the company must continue to work hard to improve its earnings and free cash flow. “Against the background of an increasingly uncertain environment we must concentrate on the things that are in our own hands,” said Hiesinger. The CEO announced further efficiency gains of €850 million for the current fiscal year.

Despite the challenging economic climate, order intake came to €41.3 billion. This is level with the prior year. New orders declined by 5% due to lower material and steel prices, and a major naval shipbuilding order booked early in the previous year. Sales came to €42.8 billion, which is level or higher year-on-year in almost all business areas. The Group profited from solid market positions and the global reach of the capital goods businesses with corresponding positive exchange rate effects.

The Executive Board expects further progress, although growing economic uncertainties and high import pressure on material markets from Asia are cause for concern, and mean that thyssenkrupp need to take a cautious view of the 2015/2016 fiscal year.

thyssenkrupp has undergone a rebranding

According to ThyssenKrupp changes need to be made to make urban landscapes more energy efficient. 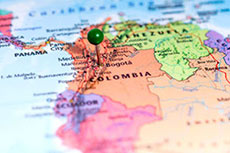 ThyssenKrupp is supplying all components for clinker production as well as quality assurance and monitoring systems.

An increased focus on the Marine Systems business unit has led to changes in the ThyssenKrupp Industrial Solutions management board.