When it comes to peak performances, ContiTech knows a thing or two – and now has another achievement to add to its portfolio together with its partner Techmi. The longest conveyor belt in Europe recently went into operation at a cement plant in Montalieu, France.

The community of Montalieu lies in eastern France between Lyon and Geneva. It is a small town located on the banks of the Rhône and home to the cement plant Vicat. To bring in limestone from the quarry 6.2 km away, Vicat required a cost-effective solution and launched a project to realise its transport needs by conveyor belt. They engaged Techmi, the French expert in bulk handling to build up the entire conveyor system. In 2012, Techmi compiled a quotation including specific requirements concerning the belt. In 2013, ContiTech beat a large number of other bidders to the contract and so became Techmi’s strategic partner. 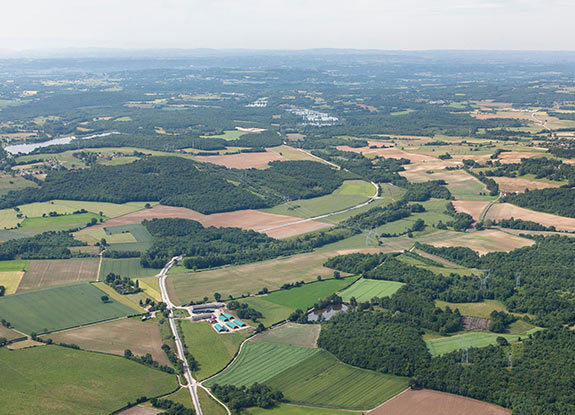 The endless steel cord belt is about 13 km long and does a twist and turn on the head and tail of the system to run parallel to the loaded belt on the return. Limestone residues remain on the returning belt rather than falling underneath it.

“Requirements for this conveyor belt are tough, especially for return solution,” reports Stefan Hoheisel, Segment Leader for Industry at the Conveyor Belt Group. The endless belt is about 13 km long and does a twist and turn on the head and tail of the system to run parallel to the loaded belt on the return.

“For Vicat and Techmi the classic return solution wasn’t really an option on this occasion. The innovative turn solution means we now have a base construction which is not higher than just 80 cm,” explains Nicolas Raphaël, team leader of the French conveyor belt team.

Another advantage is that limestone residues remain on the returning belt rather than falling underneath it. This makes the system considerably easier to clean and is an advantage not just for Vicat but also for the environment. 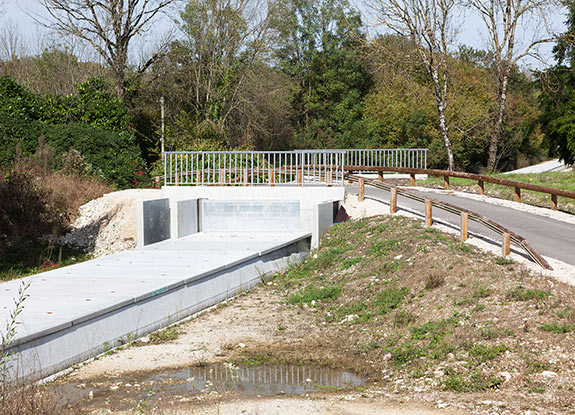 The system blends into its surroundings without any difficulty. Concrete walls and a cover encase the conveyor belt. People, animals and vehicles can cross over the construction without any problems.

The system blends into its surroundings without any difficulty – based on a patent of Techmi. Concrete walls and a cover encase the conveyor belt. People, animals and vehicles can cross over the construction without any problems.

“We opted to work with ContiTech for a number of different reasons,” explains Techmi’s owner René Brunone. “ContiTech is a convincing partner because it has many years of practical experience with conveyor belts that negotiate bends and delivers high-quality and eco-friendly products. In addition, they were able to manufacture the belt very quickly, which also impressed us.”

The belt as well as the steel cords for the carcass were produced by ContiTech Imas in Volos, Greece. “It’s basically a STAHLCORD ST1000-5+5 X, a steel cable conveyor that’s resistant to abrasion, weather and corrosion. It’s also thermally stable, highly durable and low maintenance,” explains Raphaël. ContiTech produced and delivered it within the space of just five weeks, which is extremely competitive compared to usual production time. In a first step, 13 rolls of 1 km weighing 20 tonnes each were shipped from Volos to Fos-sur-Mer on the French Mediterranean coast. From there they were transported in a spectacular heavy-duty truck convoy over 360 km to Montalieu. 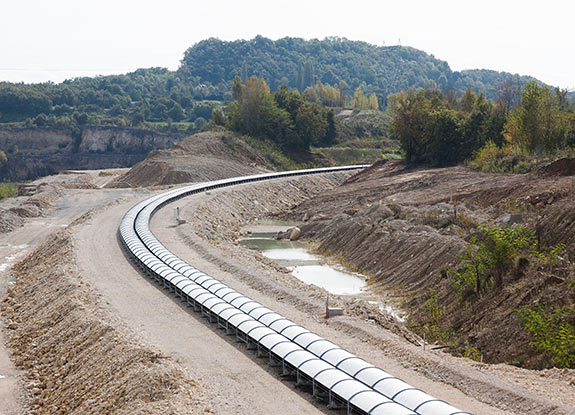 In Montalieu the team from ContiTech France and the service team from HQ in Northeim, Germany, were on site to assemble the belt. “We did the job in two stages and spent a total of two months on location,” says Jan Poppe, Head of Field Service International. Together, the team spliced the 13 sections of belt to each other – in the middle of winter, no less.

The 250 t conveyor belt is now in operation, powered by three electric motors delivering 250 kW each. In normal conditions, the belt can transport up to 700 tph of limestone. At maximum capacity, it can shift as much as 1000 t. The belt has officially been in operation since mid-October. “We’re more than happy with the way this project has turned out. With Techmi and ContiTech, we had two extremely competent partners by our side,” says M. Eric Galloy, project manager at Vicat.

Read the article online at: https://www.worldcement.com/europe-cis/20112014/contitech-and-techmi-build-europes-longest-conveyor-for-french-cement-plant-891/

Vicat has released a new range of cements and the company’s Ultimat® cement will be used for the first time on a major project, the widening of a motorway in France.