As we are heading into Q4, our thoughts go back to the strong days during the end of last year. In spite of a recent strong return of Chinese iron ore imports, history is unlikely to repeat itself. Freight rates have been on the slide since mid-summer and only Capes have resisted consistent erosion. As cargo growth remains on track with a 4% increase for the full year, it is once again the supply side that explains the decline in freight rates. 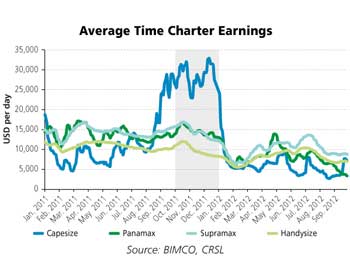 During the week ending 28 September, the largest amount of tonnage for iron ore in over a year was fixed. This is the first positive effect of the Chinese stimulus package, but the effect will only be sustainable if local Chinese steel demand picks up. The deep dip in prices on iron ore and steel reversed during first half of September, drawing a sigh of relief through the market. The optimism returned on speculation that Chinese steel mills would hike imports in the wake of the announced stimulus program and prospects of increased steel demand. 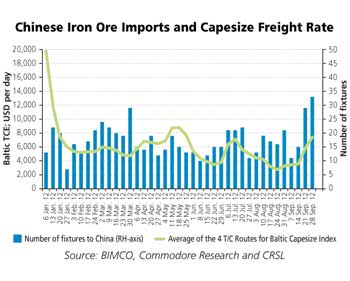 Much talk about weather-related impact on seaborne shipping of grains has now materialised with a drop in total grain exports by 20 million t this season (8% y-o-y). This affects shipping negatively as grain exports have provided a consistent growth contribution in ton-mile demand historically.

The rapid economic development in China has spurred the demand for power generation. As a consequence, China has gone from being a solid net exporter of thermal coal to one of the biggest net importers over a span of just a few years. CRSL expects thermal coal imports to be 122.8 million t this year – and with an increase to 137.8 million tons (12% y-o-y) for 2013, it appears to be coal rather than iron ore that will lead the dry bulk sector out of the slump. 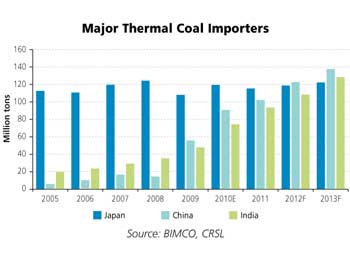 What is behind the massive inflow of new tonnage in 2012? In the current markets, both yards and owners would be better off postponing and/or delaying delivery, but we have seen astonishing levels of both deliveries and demolition. But many shipyards are short in cash, and with a back-end loaded contract, where most of the money is paid upon delivery, yards will have to deliver vessels now to strengthen their cash-flow.

The active fleet has grown by 8.8% since the turn of the year, as 964 new ships have now been delivered into a fleet that already stood at 8901 dry bulk carriers at the start of the year. Fortunately the pressure of 80 million DWT of brand new capacity being poured into the market has been eased to some extent by 375 over aged vessels being demolished. 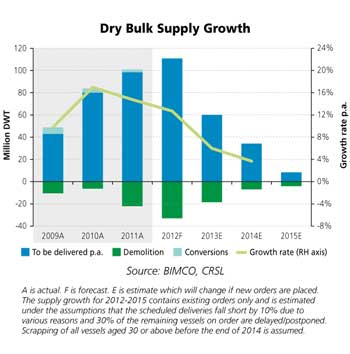 The former US Secretary of Defence, Donald Rumsfeld, once used the expression of the known knowns, the known unknowns and the unknown unknowns. Drawing a parallel to the current state of play of the dry bulk market what does that translate into?

Well, we surely know about the supply-side challenge that is a known known. We have already learned a bit about the negative effects that originate from oversupply but are we really aware of the full potential? No, is the most likely answer – that is the known unknown on this. Factors such as idling, extensive use of slow-steaming, congestion, waiting time for the next fixture, the amount of tonnage that is being repositioned whilst ballasting etc, are vital in this context. For slow-steaming, AIS Live data adjusted by DNB markets show that the fleet could sail 33% faster if needed. Fascinating and scary, all in one go.

Finally, the unknown unknowns; when is the shipping market back in a sustainable fundamental balance. The forecasts and projections are many – but the feeling of a long way back is spooky but constantly recurring.

To sum up our forecast for the coming 6 weeks, BIMCO holds the view that Capesize TC Average rates are expected to fluctuate at low levels around US$ 4000 – 11 000/day. Panamax is expected slightly higher in the US$ 3000 – 8500/day interval. For the smaller segments, BIMCO forecasts that the Supramax freight rates are likely to remain on top in the US$ 7000 – 12 000/day interval. Handysize rates, set to move sideways and less erratic, are likely to stay at the interval of US$ 6000 – 9000/day.

This is the second of a four-part summary of the BIMCO Shipping Market Overview & Outlook 2012-13. The full report can be accessed here

Read the article online at: https://www.worldcement.com/europe-cis/19102012/bimco_dry_bulk_shipping_part_2/

Peter Sand explains how macroecomics are moving more firmly but still slowly in the right direction as recent actions support the moderate positive outlook for 2013 and onwards. However, many uncertainties remain to be dealt with.

Peter Sand presents the second of a four-part summary from the BIMCO Shipping Market Overview & Outlook 2012 – 2013. This article focuses on the haunted dry bulk sector.