According to preliminary, unaudited results released via the London Stock Exchange, Steppe Cement Ltd achieved a revenue of KZT20,925 million in 2014, up 7% y/y.

Steppe Cement’s full, audited results are due to be released in April.

Read the article online at: https://www.worldcement.com/europe-cis/19012015/steppe-cement-releases-2014-preliminary-unaudited-results-161/

Tajikistan will reportedly bring six new cement plants online in 2015 – 2016. This will turn the country from a cement importer to an exporter. 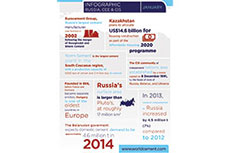 An infographic on Russia, CIS and CEE to accompany World Cement’s feature on the region’s cement sector, which was included in the January 2015 issue of the magazine.

Over the last few weeks HeidelbergCement has been revealing the winners of the national element of the Quarry Life Award 2014.