New CEO, Jan Jenisch, continues to put his mark on LafargeHolcim, announcing a series of changes to the company’s regions' management team as part of a shake up of the company’s Executive Committee. 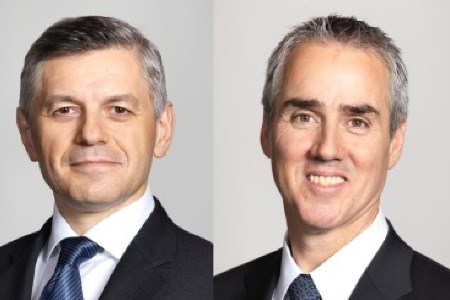 Marcel Cobuz (left) has been appointed Head of LafargeHolcim's Region Europe, while René Thibault will take up the role of Head Region North America.

The changes include a rationalisation of regional groupings to reflect geographic and business similarities, as well as new heads of the North American and European business. The 30 largest country organisations will also now report directly to the Executive Committee.

“Countries will be fully empowered and accountable for market strategies, cost discipline, and results,” said Jenisch is a press release.

A 17-year veteran of the building materials giant, Cobuz replaces Roland Köhler, who is retiring after more than three-decades with LafargeHolcim, although Köhler will continue in the role of Chairman of the LafargeHolcim Foundation for Sustainable Construction and as a non-executive director in local subsidiaries of the company.

A Romanian and French citizen, Cobuz has previously held operational roles in six countries, including as Country CEO in Indonesia and Iraq. He is currently Country CEO of Morocco.

Thibault replaces Pascal Casanova, who is leaving the group. A Canadian citizen, Thibault joined LafargeHolcim in 1989 and has been CEO of Western Canada since 2012.

In other changes to the regional businesses, LafargeHolcim’s Mexican business will joining Region Latin America, while Australia and New Zealand – previously part of Region Europe – will join Region Asia. Chain and Trading will report directly to the CEO.

Read the article online at: https://www.worldcement.com/europe-cis/18122017/lafargeholcim-shake-up-regions-leadership-team/

Zeki Özek, Özek Makina, offers insight into the processes involved in the inspection and maintenance of rotary kilns.