The group has benefited from lower hydrocarbon costs and strong underlying trade conditions in England. Going forward, pricing will reflect these lower costs, but several large contracts in Scotland are about to commence, which will have a positive impact on sales over 2016 and 2017.

The outlook for the company is positive. On the basis of continued good weather for the rest of the year, EBITDA for the full year is expected to be at the top end of market expectations. Further progress is anticipated in 2016, particularly with the acquisition of Hope Construction Materials, which is expected to close in 2Q16, pending approval from the UK Competition and Markets Authority.

Read the article online at: https://www.worldcement.com/europe-cis/18112015/breedon-aggregates-reports-strong-financials-14/ 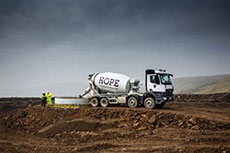 The acquisition would mark the entry of Breedon Aggregates into the cement market.

The UK’s Breedon Aggregates Ltd has reported a 25% y/y increase in sales revenue and a 37% y/y improvement in underlying EBITDA in the first six months of the year to 30 June.