At this point in time, everything points towards a stronger and expanding global economy for 2013. The prospects are underpinned by the recent strong actions by the Central Banks of the EU, Japan and the US as well as decisive action to reverse the slowdown in growth by the Chinese government. But we are probably better off curtailing our excitement, as a much stronger global economy is needed for 2013 and beyond to absorb the overhang of tonnage and get shipping back onto a more normal and sustainable supply/demand ratio.

The slowing global output growth got WTO to downgrade their 2012 forecast for world trade expansion to 2.5% from 3.7% and to scale back their 2013 estimate to 4.5% from 5.6%. On the occasion Pascal Lamy, Director-General of WTO, said that he was happy to learn about the actions of the central banks, particularly since positive growth in one region could spread to other regions, but he was also very concerned about rising protectionism, which is the last thing the world economy needs. 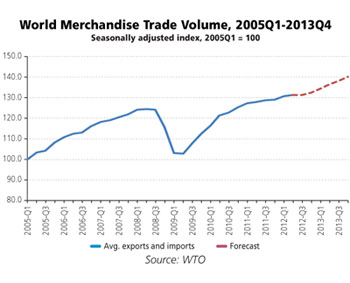 The JPMorgan Global Manufacturing PMI, compiled by Markit, rose for first time in five months but remains close to a three-year low, now at 48.9. Business conditions continued to deteriorate in September, led by weakness in the Eurozone and a stagnation of global trade flows. A slight rise in the PMI provides for some hope that the downturn may have bottomed out, though it remains too early to tell if global manufacturing has truly turned the corner.

Acknowledging that the low interest rate has undermined regular monetary policy, the Fed has used quantitative easing to stimulate the economy. On 13 September, the US Central Bank launched their third quantitative easing programme (QE3), allowing purchases of mortgage-backed securities at a pace of US$ 40 billion/month for an unlimited period of time.

On the positive side, the September ISM index was at 51.5, meaning that the manufacturing industry in the US is a provider of growth unlike the situation in the Eurozone, Japan and China.

In in an effort to counter the recent slowdown in Chinese growth, the government responded by announcing a 1 trillion Yuan (US$ 157 billion) investment plan in various infrastructural projects. The stimulus package has to some extent been reflected in the most recent positive HSBC Manufacturing PMI for China.

The economies south of the Alps are still suffering, and if the Spanish government bonds are downgraded to speculative grade, Spain would likely have to ask the EU for a bail-out. The Spanish government recently announced cut-downs of €40 billion, signalling that the country is prepared to fulfil the requirements needed to receive a bail-out via the ESM, which is set to be the new permanent European bail-out fund with a capacity of €500 billion.

On 6 September, the European Central Bank launched a new program (OMT) to purchase unlimited amounts of sovereign bonds in the secondary markets issued by members of the 17-nation Euro zone. The OMT is launched to ensure that the struggling economies in the Eurozone can acquire financing on fair terms. 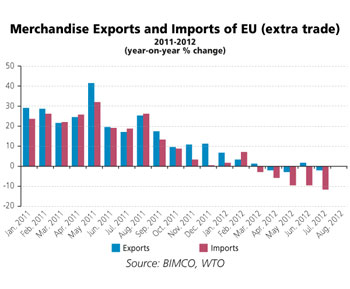 The bad economic situation in Europe is leaving indelible traces across the globe as imports are significantly down as compared to last year. Container shipping is mostly affected by this.

The optimism for improved global economics that caught fire at the start of the year has encountered increasingly strong headwinds over the summer. Output and employment data in many developed economies have continued to disappoint, as well as slower growth in exports globally.

BIMCO continues to believe that 2013 is likely to progress as compared to 2012 in terms of higher global GDP and improved global trade. The recent moves by the US Fed, the European and Japan Central Banks, as well as the Chinese government, give reason to believe that a brighter outlook is in sight. But a lot more needs to be done to support recent initiatives. The PMIs, unemployment, export figures and the continued difficult financial markets are telling their own stories! The initiatives must firmly create a climate that will stimulate investments and consumer confidence for us to believe that we have finally set course for a sustainable and lasting recovery.

This is the first of a four-part summary of the BIMCO Shipping Market Overview & Outlook 2012-13. The full report can be accessed here

Read the article online at: https://www.worldcement.com/europe-cis/18102012/bimco_macroeconomics_report_part_1/

The final instalment of BIMCO’s Shipping Market Overview and Outlook 2012-2013 takes a look at the container shipping sector, where volume growth is keeping optimism high.

Peter Sand presents the second of a four-part summary from the BIMCO Shipping Market Overview & Outlook 2012 – 2013. This article focuses on the haunted dry bulk sector.

Peter Sand presents the first of a four-part summary from the BIMCO Shipping Market Overview & Outlook 2012 – 2013. This first article focuses on Macroeconomics.