The iconic chimney at Westbury cement works in Wiltshire, which has been a landmark for 50 years, is set to be demolished. Built in 1962, that part of the plant was shutdown in 2009, and on 15 September the site owner, Tarmac, submitted a notice to the council chiefs saying that it intends to demolish the chimney and other non-operational parts of the site. This is in an attempt to provide a more attractive site for developers and preparing the area for alternative uses.

The tower, which at 400 ft is just short of the height of the spire at Salisbury Cathedral, will be brought down in a series of controlled explosions, with the entire process conducted in accordance with strict controls and regulations enforced by staff. It is hoped that the process will also reduce trespassing and the need for maintenance, thereby limiting the security problem currently posed by the site, which also includes two kilns and a chalk pit.

The storage and transfer of cement, which is still carried out on the site, will remain in place.

Read the article online at: https://www.worldcement.com/europe-cis/18092015/chimney-at-cement-works-in-wiltshire-to-be-demolished-621/

Tarmac’s Cement and Lime business has been awarded an ‘Excellent’ rating under BES 6001.

With the acquisition of the UK businesses from Lafarge, CRH has launched Tarmac, bringing together the Tarmac name with the Blue Circle logo.

The report highlights the progress made towards key sustainability targets in 2014, including the recycling of more than 7.7 million of wastes and secondary materials. 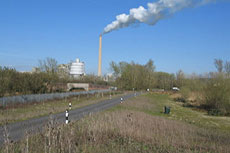 Lafarge has announced that it will demolish the mothballed Westbury cement factory due to market conditions.