On 11 November, Armistice Day, Freightliner locomotive 66418 was named ‘Patriot’ in honour of railway workers who lost their lives in World War 1. 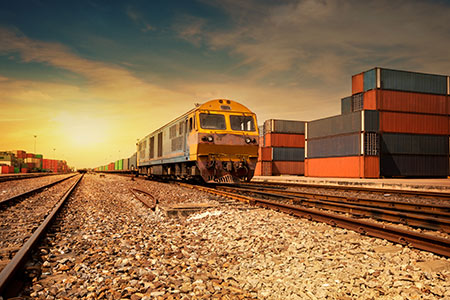 The naming ceremony, which took place at Freightliner’s new maintenance facility in Crewe, was attended by more than 40 people, including Graham Wood, whose grandfather, Wilfred Wood VC, a former employee of London North Western Railways, was awarded the Victoria Cross on 28 November 1918 for conspicuous bravery and initiative on the Italian front against Austro-Hungarian forces in World War 1.

“Freightliner is honoured to name locomotive 66418 ‘Patriot’ in commemoration of the 20 000 railwaymen who made the ultimate sacrifice in WW1,” said Adam Cunliffe. “It is particularly poignant that the naming ceremony took place at our new maintenance facility in Crewe, where the original war memorial steam locomotive ‘Patriot 1914’ was built, in remembrance of the fallen of the London and North Western Railway.”

The naming is part of an initiative entitled ‘Project Railway Honour’, the brainchild of Corporal Gareth Atkinson who serves in the 1st Battalion of the Mercian Regiment. Under the scheme, model railway manufacturer Dapol will produce a detailed scale model of locomotive 66418 ‘Patriot’. For every model sold, a donation will be made to ABF – The Soldiers’ Charity - the national charity of the British Army.

“Seeing this project come to life with this very special naming at the most apt of times was both an emotional and proud day for me,” said Gareth Atkinson. “Without the support shown by all parties, especially Freightliner, this project would still be just an idea on a piece of paper."

Phillip Naylor, Regional Director North West, ABF said: “It was an absolute pleasure to take part in the naming ceremony of the locomotive, Patriot, named in memory of fallen railway employees. The whole team at Freightliner Crewe should be very proud of the immaculate turnout of the engine and a really moving naming ceremony that caught the spirit of Remembrance perfectly. Moreover, the nameplate will be a lasting reminder of the sacrifice made by those who have gone before.

“ABF The Soldiers' Charity are very pleased to be beneficiaries of the initiative to fundraise through the sale of replica engines, and this will help us in our mission to support soldiers, veterans and their families in times of need.”

Pre-orders for the limited edition N gauge models of ‘Patriot’ can be made at the Warley National Model Railway Exhibition at the NEC Birmingham on 26 – 27 November 2016.

“It gives me both great personal and professional pleasure to be involved in this project and I know this is felt by everyone at Dapol along with all other parties involved,” said Dapol Marketing Manager, Neil Morrlle. “I felt very privileged to represent Dapol at the naming ceremony of ‘Patriot’ on the 11 November at 11:00. The service was both dignified and moving.

Dapol are proud to be involved in the project that both honours those that have fallen in the defence of our country and raises much needed funds to support our service men and women, our veterans and military families alike. The model allows the modelling community to directly support the cause; it will act as a mark of remembrance on layouts across the land.

“I sincerely hope that all N Gauge modellers will take the opportunity to support Corporal Gareth Atkinson, 1st Battalion the Mercian Regiment in this very noble cause.”

Read the article online at: https://www.worldcement.com/europe-cis/17112016/ww1-railway-workers-remembered-at-freightliner-locomotive-naming/

Tobias Schongar, Siemens, describes the company’s role in the modernisation of the Tianyang cement plant in China.