Lafarge SA and Anglo American plc have announced the sale of a portfolio of Tarmac and Lafarge construction materials operations in the UK, as well as Tarmac’s 50% ownership of Midland Quarry Products Limited (MQP) to Mittal Investments, the private investment vehicle of the Lakshmi N. Mittal family. Mittal Investments has paid £272 million for the portfolio, including up to £30 million contingent on the performance of the underlying assets over the next three years. In addition, an estimated £13 million relating to working capital of the divested assets not transferring with the business will be released as funding for the Lafarge and Tarmac joint venture.

The divestments, which are conditional upon regulatory approval, include:

The sale of these assets is the principal condition to receiving final clearance from the Competition Commission for the formation of a 50:50 joint venture, combining Tarmac’s and Lafarge’s cement, aggregates, ready-mix concrete, asphalt and asphalt surfacing and maintenance services, as well as waste services businesses in the UK. Completion of the joint venture is expected in early 2013.

Read the article online at: https://www.worldcement.com/europe-cis/16112012/cement_lafarge_uk_tarmac_angloamerican_sale_744/ 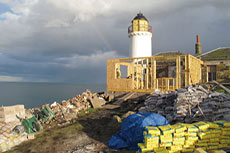 Due to the weather proof qualities of the cement itself and its packaging, Lafarge Mastercrete has proven to be the ideal choice for an exposed project on the remote Isle of May, Scotland.

Competition Commission rules that Tarmac and Lafarge UK must sell a large share of their operations if joint venture is to go ahead.