Philipp Kley, the company’s Senior Vice President Construction Chemicals Europe, says that the company identified an increasing demand for alternatives to mineral oil-based released agents and aligned its research efforts accordingly. He added that the investment will strengthen the company’s release agent business in the European marketplace and help BASF to achieve a leadership position.

Ease of use and reduced production costs

Form release agents facilitate the easy removal of the concrete from its formwork. At the same time, they also enhance the surface of precast concrete elements and cast in place concrete.

The Master Builders Solutions experts have, among others, developed new release agent formulations based on natural raw materials such as plant oil.

BASF offers a complete range of MasterFinish form release agents under the Master Builders Solutions umbrella brand, as well as in-depth application technical advice on the selection of the right product and the best possible application process.

The new release agents made from natural raw materials provide an alternative to mineral-oil-based release agents, most of which have to carry an “Aspiration Hazard” label as of 1 June 2015. This is due to the labelling requirements of GHS. The new Globally Harmonized System of Classification and Labeling of Chemicals now also applies to chemical mixtures and thus to concrete release agents. Based on renewable raw materials, release agents from BASF are not classified hazardous and will not require labelling.

Read the article online at: https://www.worldcement.com/europe-cis/15072015/basf-commissions-new-construction-chemicals-production-plant-167/ 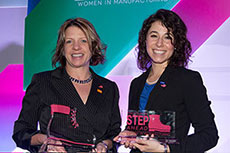 BASF has expressed its support for the STEP (Science, Technology, Engineering and Production) Ahead initiative, joining with The Manufacturing Institute to recognise the importance of women in manufacturing and leadership roles.