The Turkish cement industry began production in 1911 with 20 000 tpy capacity. In the 1950s, production reached 370 000 tpy, but it did not meet local market demand until the 1970s. With export volumes rising every year, the country’s cement industry has gained increasing importance in the economic structure of Turkey, while also providing a significant level of employment. Today, the Turkish cement sector includes a total of 68 cement plants (48 integrated plants and 20 grinding-packing plants) and employs 15 000 people.

Cement and Clinker Production in Turkey

Due to optimum weather conditions, there was an increase in production and sales in the cement sector during autumn and winter seasons.

The increases-decreases in domestic sales and export sales for Turkey’s cement industry in 2014 have been examined and it was shown that domestic sales in Marmara, Mediterranean and Aegean regions had increased, but Southeast and Black Sea Region export sales decreased.

A focus on urban renewal projects is very important for the construction and cement sectors. It could increase the demand for cement and it may continue to increase the infrastructure and construction activities in Turkey until 2023. Cement could reach 99.8 million t, while consumption is expected to reach 78.9 million t. 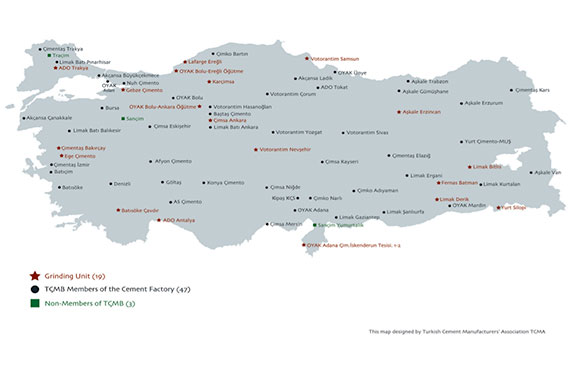 The map shows the location of cement producers which are primarily located in Marmara, Central Anatolia and the Aegean Region.

This article was written by Ersagun Çabuk, Turkey.

Read the article online at: https://www.worldcement.com/europe-cis/15042015/turkey-growing-cement-industry-and-market-683/

Reuters reports that joint venture partners CRH and Eren Holding have applied to Turkey’s competition authority for permission to sell their JV to the OYAK Group.

Paul Maxwell-Cook takes a look at Turkey’s growing economy and expansion. This is part one of an abridged article taken from the December 2013 issue of World Cement.

Çimsa is the first Turkish company to become a member of the Cement Sustainability Initiative.