Lars Engström has been appointed President of Sandvik Mining and will be included as a new member of Sandvik Group’s Executive Management. He will start the position on 15 December.

Previously President and CEO of the air treatment solutions company Munters, Lars has an extensive industrial background with over a decade’s experience in the industry. He has held multiple leading positions within Atlas Copco, and has also worked for Seco Tools. His career has comprised of international positions with locations in several continents.

“I have come to the conclusion that a new leadership is needed to develop Sandvik Mining going forward. I am convinced that Lars Engström, whom I know well from Atlas Copco, has the experience and the leadership qualities required for this. At the same time I would like to thank Scot Smith, who leaves Sandvik, for his contributions,” says Sandvik’s President and CEO Björn Rosengren.

Read the article online at: https://www.worldcement.com/europe-cis/14122015/new-president-for-sandvik-mining-175/ 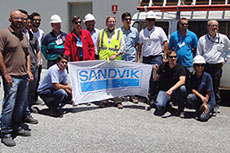 Sandvik Construction held a series of seminars in Argentina and Brazil in October and November.

Sandvik’s Executive Vice President will retire at the end of April.