EngineeringUK has released ‘The Engineering UK 2015 The State of Engineering’ report. This research indicates that filling the demand for new engineering jobs will contribute a further £27 billion/year to the UK economy from 2022. However, 182 000 people with engineering skills will be required each year over the next decade and at present there is an annual skills gap of 55 000 workers. Some of the key facts from the report are provided below.

The full report, as well as key engineering statistics and infographics, can be found here.

Comments and calls to action

EngineeringUK has called for collaborative action across government, engineering businesses, the education sector and the wider engineering community to realise the following recommendations:

“Engineering is a vital part of the UK economy, not just in terms of significant turnover but also with regards employment. For every new engineering role an additional two jobs are created in the economy. The engineering community is increasingly involved in a collective drive to inspire the next generation, who will ensure the continued growth and success of the industry in the UK. This collaborative work must continue if we are to come even close to realising engineering’s potential,” stated Paul Jackson, Chief Executive, EngineeringUK.

Stephen Tetlow, Chief Executive of the Institution of Mechanical Engineers called the report “a wake-up” call to government and industry, adding: “We must grasp the opportunity before it is too late. If we get it right we can boost the UK’s economy.”

Commenting on the report, Nigel Fine, Chief Executive of the Institution of Engineering and Technology, said: “There has never been a better time to be an engineer: demand that far outstrips supply, rising salaries and fantastic career prospects are typical characteristics of the engineering profession today. Ensuring a pipeline of future engineering talent depends on stronger collaboration between employers and the educational system. We need to bridge the gap between expectations and achievement, in addition to up-skilling the existing workforce to meet demand.”

“Above all, we need to take action now – before it is too late. Otherwise we could find ourselves sleepwalking into a deepening skills crisis from which we may struggle to recover.”

Read the article online at: https://www.worldcement.com/europe-cis/13012015/engineering-uk-publishes-2015-state-of-engineering-report-128/

As part of its commitment to support the UK government’s ‘Your Life’ campaign, London’s Science Museum has opened a free, interactive exhibition – ‘Engineer Your Future’. 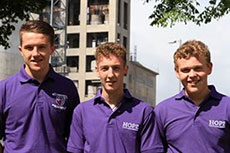