The Markit/CIPS UK Construction Purchasing Managers’ Index® has revealed an increase from 59.4 in October to 62.6 in November 2013. The figure represents the seventh consecutive month of increased business activity and the highest rise in overall activity in more than six years. In November, house building experienced the fastest growth in activity for a decade. Commercial construction also picked up, with the highest expansion rate since September 2007. Furthermore, construction companies have also expressed a greater level of optimism for the year ahead.

“Construction activity continues to spring back to life during the final months of 2013. Sustained improvements in infrastructure and residential building helped keep the sector on a strong recovery path in November,” said Tim Moore, Senior Economist at Markit. “That said, construction growth is still coming from a low base as output levels rebound from a deep and protracted double-dip recession that only really ended this summer.”

“Therefore, while construction’s current growth trajectory may be the steepest for over six years, there is still a huge loss of output to recoup before the sector reaches its pre-recession peak. Looking ahead, there are a number of positive signs that improvements in activity levels will be maintained, as job creation picked up again in November and confidence about the business outlook reached its highest level since September 2009,” added Moore

The World Business Council for Sustainable Development (WBCSD) Cement Sustainability Initiative (CSI) is looking for a candidate to drive the development of a Responsible Sourcing Scheme (RSS) for concrete.

Lafarge Tarmac beat off high profile competition to pick up prizes for its social media programme and its marketing campaign for ready-to-use cement products in tubs. 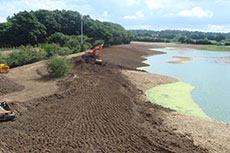