In favour of PE

A recent development in vented polythene packaging for cement is the commissioning of yet another Arodo Twinspout PE packer at the Hanson plant in Padeswood, North Wales next month.

The recently installed line will reach output up to 500 bags per hour and adds further weight to the position that polythene will become the new normal in packaging for cement.

Likewise, demand for VentiSack, bpi.visqueen’s own vented polythene sack, has doubled in the same period for already-installed lines. 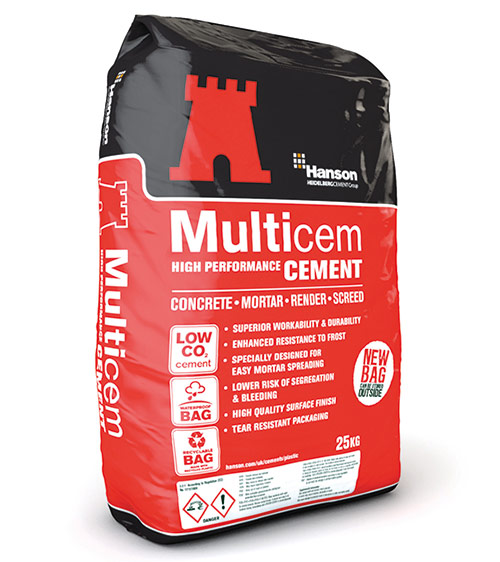 With polythene packaging, it is possible to print high-impact colours with 360° coverage.

At the heart of this transformation is an appreciation of the numerous functional benefits of packing cement in vented polythene.

One of the most common causes of product spoilage in traditional paper sacks is water ingress – a question to which vented polythene appears to be the answer.

More impressively, packing cement in vented polythene has also led to a dramatic shift in product perception, which has led to the premiumisation of cement packaged in polythene.

In addition to the functional benefits that are apparent, end users also naturally anticipate a better user experience – end users intrinsically understand the many benefits of cement packaged in vented polythene and are willing to pay a premium for it. This is reflected in the fact that cement packaged in polythene is typically priced several price points higher than traditional paper sacks – even where they are sold side by side.

The ability to print in a high impact eight colours with 360° coverage of the entire film tube also means that polythene offers an enhanced marketing vehicle in comparison to traditional paper sacks – enabling cement manufacturers to present the benefits of their products like never before.

This enhanced promotional potential enables brands to connect with their end users in an entirely new way that is not achievable with traditional paper sacks – adding to and supporting the credibility of product benefits whilst instilling confidence that the product will meet their needs and expectations.

In commercial terms, vented polythene packaging for cement appears to have reinvented a traditional product that may have otherwise struggled to challenge ingrained long-standing brand sentiment.

In stark contrast to typical perceptions of plastic packaging, an independent study has shown that plastic cement packaging is more environmentally friendly than paper packaging during the full term of its use.

It highlighted that the amount of cement wastage caused is the most significant aspect determining the environmental effect of paper bags and that one tenth of paper bags are damaged after receipt by the merchant.

The complete story of a product’s environmental credentials is becoming a key factor in buying decisions – not just where it comes from and how it was made, but also how it is packaged and the environmental impact this has.

As vented polythene sacks are 39% more environmentally friendly than paper bags (Source: Lafarge), they are the packaging media of choice across a range of industries, including cement.

Investing for the bigger picture

Meanwhile, it is becoming increasingly apparent that vented polythene is also an attractive packaging medium for other moisture sensitive goods that are stored outside or packed on high-speed packing lines.

Ultimately, bpi.visqueen is preparing to lead the way in vented polythene packaging as an alternative to traditional paper sacks.

Written by David Khanna, Commercial Director, bpi.visqueen, UK. This article featured in the May 2015 issue of World Cement. Subscribers can read the full May issue by logging in. They can also read the magazine on smart phones and tablets by downloading World Cement’s app.

Read the article online at: https://www.worldcement.com/europe-cis/12052015/transforming-product-perception-819/

The UK’s Builders Merchants Federation (BMF) has announced that Hanson Cement will become a member of the organisation, effective 1 February 2015.

The company has put in an application to replace its existing paper packaging line with plastic at the Padeswood cement plant in North Wales.