Construction new orders in Q3 was boosted by another strong quarter from the infrastructure sector, which contributed a value of £4.5 billion, an increase of 42% year on year.

Barbour ABI, the chosen provider of construction new orders estimates to the Office for National Statistics (ONS) has new orders for Q3 valued at £16.1 billion, a figure that has been steadily rising for a number of years. 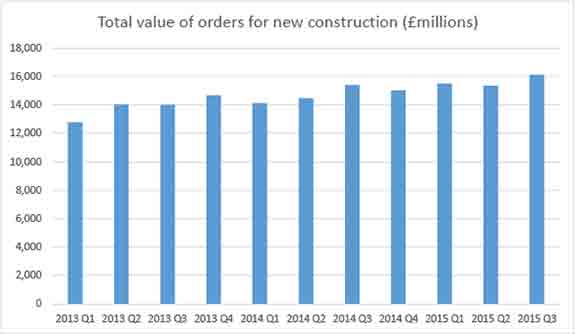 In a change from the recent dominance of the residential sector, four of the five biggest projects across construction in Q3 came from infrastructure, including the £1 billion Thames tideway tunnel project and the £600 million Race Bank offshore wind farm. There is also evidence of a geographical spread across all the £100 million plus infrastructure projects in Q3, with their locations extensively covered across the United Kingdom in areas such as Northumberland, Cheshire and Lincolnshire. This differs when compared to many other construction sectors, where the major projects are often London dominated.

Commenting on the figures, Michael Dall, lead economist at Barbour ABI, said: “The third quarter in construction saw an increase in new order values despite the wider slowdown in growth across the UK economy. In particular, the infrastructure sector experienced strong gains in the third quarter, with major projects such as the Thames Tideway Tunnel reaching the contract stage. These are the types of major projects that have been scarce in recent years so they provide a welcome fillip to the sector and, after further funding was confirmed in the Comprehensive Spending Review, future prospects for infrastructure have improved significantly.”

“In addition, the latest ONS output figures for October which shows growth of 0.2 per cent compared with September, suggests a potentially stronger finish to the end of the year after the summer slowdown.”

“Overall, the levels of appetite for investment across construction remain strong at the contract stage. However, the problems lie more on the supply side at present, with skills shortages in particular a major challenge in moving projects from the conceptual to the delivery phase.”

Read the article online at: https://www.worldcement.com/europe-cis/11122015/infrastructure-new-orders-continue-climb-q3-166/

According to Barbour ABI, in the UK construction contracts in infrastructure almost doubled in September.

According to the latest ONS data, in November 2014, output in the UK construction industry was estimated to have fallen by 2.0% compared with October 2014.

In October 2014, output in the construction industry decreased by 2.2% compared with September 2014, with declines in new work and repair and maintenance.

The level of construction contracts awarded increased in September to the value of £5.6 billion – the highest since January.