Operating results were positively impacted by the continuing recovery in the US and the improvement in the Greek market. However, profitability in Southeastern Europe and Turkey declined due to poor weather, while in Egypt continued gas shortages necessitated clinker imports, which also increased costs. Going forward, investments are being made in Egypt to decrease reliance on gas.

Group net debt at the end of the first quarter stood at €660 million, increased by €119 million compared to year-end 2014. Group debt levels reflect the increased investments undertaken primarily in the USA and in Egypt, increased working capital requirements in growth markets, the seasonality in demand, as well as the negative effect on US$ and Egyptian pound-denominated debt owing to foreign exchange movements.

Group capital expenditure in the first quarter of 2015, excluding acquisitions and intangible assets, stood at €35 million versus €14 million in the corresponding period in 2014.

Looking ahead, the group maintains optimistic for the full year for the US and Egypt, while no significant improvement is expected in the markets of Greece and Southeastern Europe.

Read the article online at: https://www.worldcement.com/europe-cis/11052015/titan-cement-reports-increase-in-consolidated-turnover-816/

The Italian cement producer has reported its results for the first quarter, which show a varying global picture according to specific market dynamics. 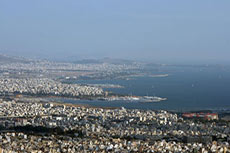 The Greek cement company has reported net profit of €31 million for FY14, following a loss of €36 million in 2013.

Alvacim Ltd, a subsidiary of the Titan Group, has purchased the European Bank for Reconstruction and Development’s 20% stake in ANTEA CEMENT SHA.