Compared to January 2014, demand for bagged cement has tripled. The highest demand has been for cement types CEM II/A-SH 32,5B and CEM II/A-SH 42,5N. These are sold in eco-friendly and durable 50 kg three-layer paper bags and in big bags of 1000 kg.

Kavkazcement is based in the North Caucasus, Russia, supplying the local area as well as the country’s southern federal districts.

Read the article online at: https://www.worldcement.com/europe-cis/10022015/production-volumes-increase-for-kavkazcement-january-2015-307/ 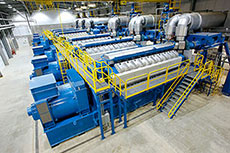 Wärtsilä has been awarded a contract to supply 11 industrial power plants to Eurocement’s Russian facilities as part of the cement manufacturer’s modernisation programme.