IA Cement, UK, has published its Cement 2014 research report, a comprehensive document examining 2014 trends. The report takes a detailed look at consumption prospects around the world and conducts a review of key risks, competitive pressures and trading flows. It examines the world’s cement hotspots and includes a review of the world’s leading cement producers. This article presents a summary of demand prospects by region, taken from the 2014 report.

Western Europe – at last, some hope

In 2014, it is anticipated that Western Europe will enter its seventh consecutive year of falling cement volumes. Despite this, the first signs of stability and recovery in the region are becoming apparent. GDP is once again growing in several countries; the European Union has become gentler in imposing austerity measures on struggling southern nations and manufacturing is beginning to pick up again in a number of markets. In 2014, a small decline of 2 – 3% in cement demand is expected. In this context, growth is likely in markets such as Germany, the UK and Nordic regions, as is stability in France and Belgium. Smaller rates of decline (5 – 8%) in southern nations such as Italy, Spain and Greece are expected.

Eastern Europe is likely to see a slight increase in consumption growth rates in 2014, with volumes increasing by 2 – 3%. A slowdown in Russia will probably be offset by an improvement in most other countries. The cement market in Poland appears to have turned a corner after falling by almost a quarter in the last two years and 2 – 3% growth is probable in 2014. Markets such as the Czech Republic, Hungary and Romania are still struggling but rate cuts are working and these markets are predicted to stabilise overall in 2014. The Ukraine remains in difficulty, with political concerns and a big increase in gas prices. Cement volumes will drop by approximately 3%. In Russia, the overall economy has slowed sharply in recent months, although cement consumption has held up very well, boosted by several infrastructure projects. With the Sochi Winter Olympics starting soon, a slowdown in cement consumption is forecast for 2014, towards a 3 – 5% level.

Written by Imran Akram, IA Cement Ltd. This is an abridged version of the full article, which appeared in the January 2014 issue of World Cement. Subscribers can view the full article by logging in.

Details of the full report are available at www.iacement.com or by emailing publications@iacement.com. 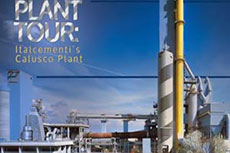 World Cement featured a plant tour of the Calusco plant in the August 2013 issue. This short video shows some of the highlights.

In September 2013, shipments of Portland and blended cement in the US and Puerto Rico reached 7.9 million t, representing growth of 14% y/y.

Imran Akram, IA Cement Ltd, UK, provides an update on the cement markets across the MENA region. This is an abridged article from the November 2013 issue of World Cement.