Contracts granted for new build residential units plummeted to the lowest level of the year in May. 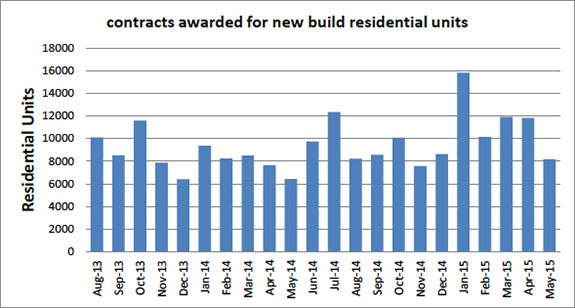 Barbour ABI’s latest data shows that contracts were awarded to construct a total of 8175 new build residential units across the UK in May, nearly 8000 units less than 2015’s peak level of 15 812 units in January.

This recent drop will not threaten the construction industry however as early indications show that residential construction has had a strong start to 2015. Awarded contracts to build residential units in the first four months of the year are up 32% compared to the same time-frame in 2014.

Michael Dall, Lead Economist at Barbour ABI, commented: “With much uncertainty looming around the general election last month and a hung parliament looking like the probable outcome, it seems likely that investors and housebuilders decided to wait for the outcome of the election before coming to a decision on significant housebuilding projects.”

Read the article online at: https://www.worldcement.com/europe-cis/09062015/contracts-granted-build-residential-may-973/

A report released by the Home Builders Federation demonstrates the contribution that the house building industry makes to the UK.

New planning rules will require construction equipment to cut emissions by approximately 40% by 2020, while new funding has been confirmed to address London’s construction skills shortage.

New figures show a huge increase in the value of construction projects in the UK, with the infrastructure sector achieving more than 100% y/y growth in December 2013.