The newly expanded Kason Kek-Gardner will make its first appearance since the merger of UK-based Kek-Gardner and US-based Kason Corp in 3Q15 at Powtech 2016.

The combined capabilities of Kek-Gardner and Kason centrifugal sifter models now lead the world in both size and scope, offering lab units to the world’s largest sifters, with capacities of up to 100 tph.

"Since the new Kason Kek-Gardner is an expansion, with no consolidation of personnel or facilities, Kek-Gardner customers will retain access to the same Kek-Gardner equipment, services and people as before, plus the entire line of sifters, round vibratory screeners and fluid bed processing equipment from Kason," explains George Tunnicliffe, Kason Kek-Gardner's Managing Director.

The expanded centrifugal sifter line is complemented by Kason's extensive line of round vibratory screeners, which encompasses the world's widest range of designs and sizes, from 46 cm diameter laboratory units up to 250 cm dia. screeners with capacities to 150 tph, and by Kason's ultra-high capacity static sieves.

Rounding out the screener line are Kason Kek-Gardner vertical in-line sifter models for check-screening several kilos per hour to production screening of up to 50 t per hour.

Tunnicliffe says, "The screening equipment line complements other Kason Kek-Gardner and Kason equipment in terms of upstream and downstream positioning in the process stream."

Read the article online at: https://www.worldcement.com/europe-cis/07042016/kason-kek-gardner-to-appear-at-powtech-843/ 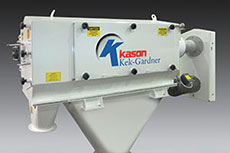 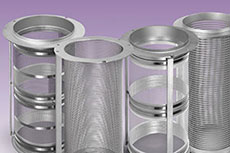 Kason Kek-Gardner has announced a new K-Series Replacement Screen Programme for all makes and models of centrifugal sifters.

US-based manufacturer Kason Corp has acquired the UK-based company Kek-Gardner Ltd, to become the largest manufacturer of centrifugal sifting equipment in the world. 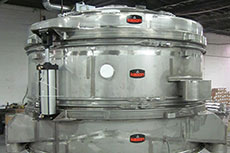 The K100-2(IRC)-SS from Kason can separate oversize particles from bulk material at rates of up to 150 tph.