Peng Shou introduced the achievements of the Triumph Technology Group Company in the fields of cement, glass and new energy, and reviewed the achievements made in the field of waste heat power generation with OYAK. Mr Celal congratulated Triumph Technology Group Company on its achievements and expressed a desire to further enhance the two companies’ cooperation in various business segments. During the visit with Mitsubishi, Peng expressed his gratitude for the company’s support.

Read the article online at: https://www.worldcement.com/europe-cis/07042015/ctiec-delegation-visits-oyak-in-turkey-643/ 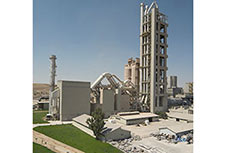 Loesche has begun installing an LM 45.4 mill at the Bastas Baskent Cimento plant in Elmadag, Turkey. The mill was ordered by Vicat Service Technique Ciment in May 2014.

An order for three vertical roller mills for Bolu Cimento Sanayii A.S. will be fulfilled by summer 2014